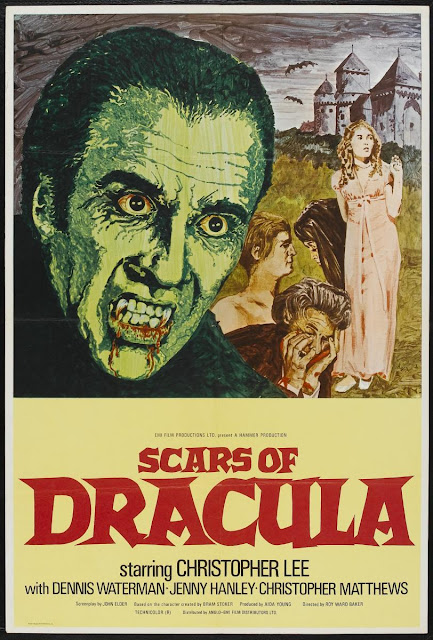 Watched:  10/28/2021
Format:  YouTubeTV
Viewing:  First
Decade:  1970's
Director:  Roy Ward Baker
Christopher Lee played Dracula 10 times on film, 7 times for Hammer, this being the 5th outing for Hammer.  This Dracula film is one of 9 movies Christopher Lee starred in during the year 1970, when he was still sort of doing lines as Drac, and not just standing there or growling.
Anyway, the man was supernaturally prolific.
There's a lot to like in this movie - and by that I mean Christopher Lee, Michael Ripper being incredibly difficult, and a large rubber bat.  The sets and FX aren't half bad (minus the bat, which figures prominently).  And, the movie seems to be trying to get not just how evil Dracula is, which is clear by this film, but they really go to town.
The film opens on the thing you always wonder about in these movies - why don't the locals just go up to Drac's castle in daytime and burn that mother down?  And they do!  But to no avail.  As they're up there, Dracula also sends his minion giant bats to the church where the women are hiding and has the bats murder them.  Which begs the next question no one ever answers in these films...  when do you pick up and move away?  Or go appeal to higher authorities?
This movie takes place at least by the mid-19th Century (I'm not sure when, exactly).  It seems like someone would go tell the Burgomeister about the pesky vampire problem.
Well... no one leaves and no one seeks reinforcements.
The actual plot of the film is that a law-student's lothario brother is boffing his way into trouble, and that eventually gets him chased out of town and via an unlikely sequence of events, to Dracula's castle.  Drac puts him up for the night, and Drac's latest concubine, seeking a partner to help her escape, targets the brother.  Things go badly for everyone.
Meanwhile, the brother and his virtuous ladyfriend begin pursuit, which... wouldn't you know it?  Lands them at Castle Dracula.
I don't want to give too much away, but there's a young woman who cannot keep her mouth shut for good or ill, and is indirectly responsible for getting many people killed.  There's almost no one to root for on the good guy side as our heroes are bland-o's, so you will root for Drac.  And, if you're Jamie, root for the rubber bat.
This film isn't high art.  It's what Hammer was sliding into during the 1970's.  Some attractive women who have a legal minimum of cleavage they must show, a villain, very bland heroes, and endings that feel rushed after the story seems to wind for a bit.
Posted by The League at 10/29/2021 10:45:00 AM