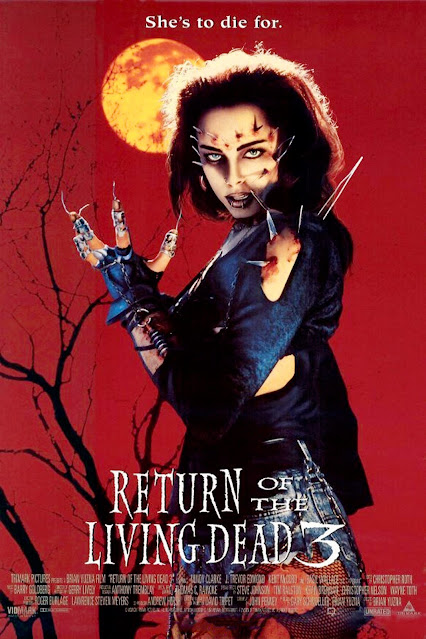 Watched:  10/29/2021
Format:  HBOmax
Viewing:  First
Decade:  1990's
Director:  Brian Yuzna
I enjoyed this movie just fine, but I don't know how much and at what point the movie was kidding.  Maybe writ-large?  But it also seemed like it was being serious?  It sure wanted to do a doomed lovers plotline that, sure... why not?
But, yeah, it's a movie about the son of the military guy still mucking about with zombies and Trioxide which makes zombies - who is dating out of his league.  An accident occurs and his girlfriend is killed, so he exposes her to zombie-gas because he believes that the heart will go on, I guess.
Aside from zombie piercing fetish stuff, the movie is also an excuse for some Hollywood FX folks to flex, and, boy, do they ever.  Mostly that's bookending the movie, but when it shows up, it's really solid work.
The name actor in this, as far as this blog is concerned, is Sara Douglas, who plays a very Sarah Douglas military officer.  But Melinda "Mindy" Clarke is... really good in this?  Like, she's asked to do A LOT under less than ideal conditions, and she does it all as the formerly alive girlfriend, Julie.  Anyway - she's still very much working and I guess I've seen her in things, but I did not watch The OC, so I missed out on that adventure.
But, yeah... the movie feels like it's kidding, or at least not taking it as seriously as Romero takes his zombies, and it's probably a decent tone.  But it's also the 90's, so it's got a weird layer of anti-Hispanic racism which, you know, was incredibly common at the time.  So, maybe not "weird", but...  at least super clunky.
I don't get how zombies work in this, and I don't care.  It's fine.
One thing I do know:  someone had a very specific kink and managed to work it into a feature film.  And for that, I applaud them.
And I am all for a movie where the leads die in an incinerator in a loving embrace in the final shot.  Slow clap, movie.
Posted by The League at 10/29/2021 10:34:00 PM