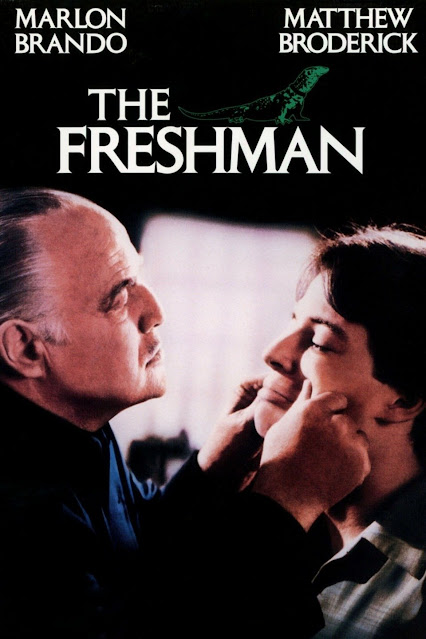 Watched:  04/12/2022
Format:  HBOmax
Viewing:  Unknown
Decade:  1990's
Director:  Andrew Bergman
I'm kind of fascinated by the writer/ directors who did a few things but aren't workhorses with thirty directing credits or a hundred writing credits.  Because Andrew Bergman is one of these guys.  He doesn't have any movies in his IMDB that's a big mark against him, but it's just not clear why their last big credit was in, like, 1997.
The Freshman (1990) arrived at a very peculiar time in my life.  That summer I had been in DC for my uncle's wedding, and we had some downtime as it wasn't a touristy sort of week in town.  And, frankly, although my brother and I were 15 and 17, we got shunted to the side as not-adults.  My uncle, being my uncle, had some videotapes he owned, and that included Godfather, Godfather II and Das Boot (just to prove Bob knows how to party).  And, Jason and I watched all three.
Anyway, 1989-1990 was more or less the year that I became a nascent film-jerk, because that Spring we'd also rented Lawrence of Arabia and a host of others for the first time.  But The Godfather movies hit me like a ton of bricks.  And then I got home, and a few weeks later, The Freshman hit theaters.
To this day, this is one of my favorite comedies.  Everyone in it is perfectly cast and nails their business.  Brando is fucking magical.  Broderick is the best he'll be til Election.  And it rewards rewatches to really pick up on some of the dialog and what people are doing and saying.  Man, we lost Bruno Kirby decades too early.  And, man, Penelope Ann Miller is so, so good.
But, yeah, I absolutely love this goofy movie.  It's incredibly warm-hearted for a movie made in a period where that often translated to schmaltz or dumb-assery (this same producer made Chances Are).  And I still think it's psychotic that this movie didn't do better, but maybe the Godfather crowd didn't want to see Brando send up one of his most famous characters, and maybe the younger crowd wasn't interested.
And how DOES a komodo dragon fit into a mob comedy, anyway?  Or Bert Parks?
Anyway, I think history has mostly been kind to the film.  Hasn't it?  I don't know.  But it was a great little push to let me know "movies can be fun" - not just the movie I was watching, but how it played with the most sacred of cows.  It's still shocking to me that all the pieces came together as they did.
Posted by The League at 4/12/2022 11:39:00 PM