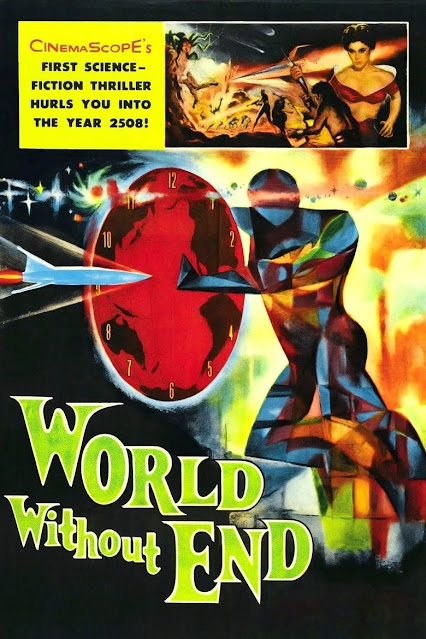 I mean, yes.
I have no idea how I recorded this movie, but I did.  I'm guessing by accident.  I put it on to see what it was, and - while not good or great - there's a bit of The Time Machine and what we'll all know from Planet of the Apes and Beneath the Planet of the Apes to this movie.
Some astronauts return to Earth only to find they didn't just pass through space, they passed through time - a few hundred years.  On the surface, they find giant spiders and brutish troglodytes, and as they meet a race of subterranean people who seem much more like the people they left, they find that there was a nuclear war at some point.  While safe in their underground city, the men have turned weak and fearful, and the women - hot and mini-skirted.   And disappointed in their men.  So of course they like Rod Taylor popping his shirt off and bringing the gun show.
Anyway, it's mostly curious in that it seems like Hollywood did watch the movie and said "we could do this better".  And they were not wrong.  Just twelve years later, Planet of the Apes - with Rod Serling and the original novel behind it - doesn't just turn the opportunity into a sex fantasy/ reinforcement of our exceptionalism as mid-Century Americans.
Posted by The League at 4/11/2022 10:24:00 PM