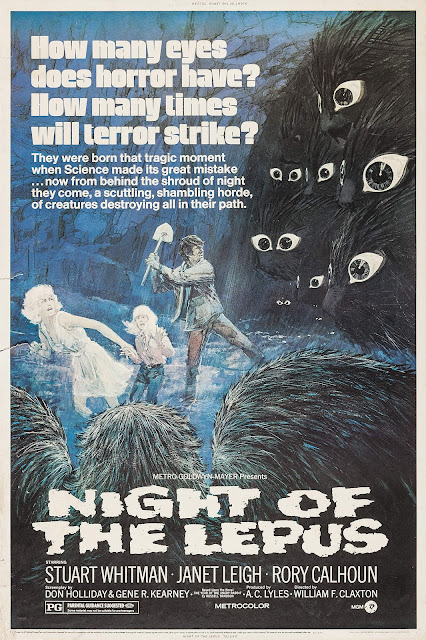 Watched:  04/08/2022
Format:  Amazon Watch Party
Viewing:  First
Director:  William F. Claxton
You'd think a movie about giant, mutant rabbits with a taste for human flesh would be more exciting.  But, alas, that is not the case with Night of the Lepus (1972), which seems like such a missed opportunity.  And I welcome some enterprising soul to remake and improve the idea.  NOW IS THE TIME.
The movie features Rory Calhoun, Dr. McCoy and Janet Leigh, among others.  Janet Leigh is kind of weirdly wasted in the film, but wears an interesting array of stripes.  And it also features a lot of bunnies shot in slow-mo on scale sets, and it is goddamn adorable.
The main character and his family are entirely responsible for the science and bad decisions that create the mayhem of the movie, and should be in jail.  Even the little girl.  It's a hell of a script.
Anyway, my middle school floor hockey team was named The Slaughter Bunnies, and I really wish I could say we based it on this movie, but we did not.
Posted by The League at 4/10/2022 12:04:00 AM