So, then I watched a bunch of stuff I'd already seen before

Saturday evening I had the unique and bizarre experience of watching the entirety of Birdemic with Jamie's parents.  We thought they would just want to see the first ten minutes or so in order to understand what we were talking about, and then...  we were watching the end of the movie.  So, if you're keeping score, that's 3 viewings for Jamie and me, 4 for Doug and now one a piece for Jamie's folks.

James Nguyen owes us something.

We also watched the RiffTrax synched with Return of the Jedi, and given how many times I've seen Jedi, it was nice to see the movie under a bit of a new light. 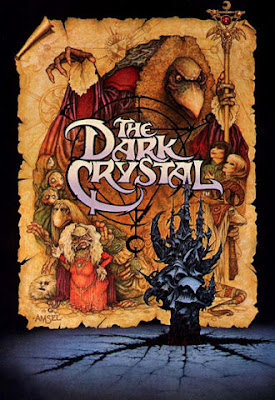 This evening all five of us headed down to the Alamo Ritz to see a screening of the 1983 feature The Dark Crystal.  I assume most of you raised properly on a diet of matinees in the 1980's have seen The Dark Crystal, a Jim Henson feature film that's just an exemplary fantasy flick that may not have even been state-of-the-art in 1983, but is so embedded in classic camera tricks, puppetry, practical effects, etc...  that the film is just mindboggling to watch in this day and age.  In short - what we'd now create in lush digital, generated by somebody sitting on their duff in a chair somewhere in an office park was actually physically created, with bellows or strings or hydraulics in order to make it work.  And when you see that...  well, my eyes can forgive the mistakes and flaws pretty when your eye isn't lying to you about the fact that these things are actually there.

I won't lie and say things like "Avatar is a sham!  I'm a practical effects purist!"  I'm not.  Avatar is a sham for completely different reasons, but its a neat thrill ride.  I just hate to think of the craftsmanship that's being lost in movie making as the answer is now, invariably, to make sets, non-human characters, etc... out of bits instead of, I guess foam or whatever they used to do for muppets.

And you have to also think:  what level of detail are we currently missing as studios go for digital over practical?  I mean - I was looking at the costumes and textures and layering on all these characters, and its hard to believe that anyone would think that was a good idea except for people actually cutting and sewing to make things to scale for a movie like this.

I know what you mean about digital effects. Over the weekend I hit upon a re-run of Fraggle Rock on TV. I was immediately engrossed in the show. It was just so easy to believe that this puppets were real living creatures.

And then during commercial breaks we got a really bad example of digital effects. The leader of the NDP, Jack Layton, who is in third place in the run for Prime Minister of Canada is putting out some commercials. You can obviously tell that Jack has been superimposed into crowds of cheering people. It is really embarrassing as they could've hired someone who knew iMovie better.

The terrifying truth is that the Fraggles (and Doozers) were real creatures found in a laboratory at the University of Iowa and sold to Henson for cash, part of the back-end and three muppets to be named later (I believe that got the Mnah-Mnah Guy).

The bodies of the Fraggles now hang in odd poses in a meeting room at Disney, stuffed and with glass eyes. Its absolutely mortifying, but you should see what they did with the other Mills Twin if you want a real scare (sure, sure... there was ever only Haley).

Y'know, I had this same thought regarding Dr. Who, when I saw a bonus feature where Eccleston was talking about finally having the production values and how embarassing the old ones are. But if you watch the 1st reboot season, man, CGI doesn't age well, and it's the uncanny valley of something not quite interacting with the environment.

It will be interesting to see if the CGI of the 90's and 00's will be regarded as a close-cousin of stop motion by film buffs in 30 years. And I still don't think a lot of CGI looks as good as models used properly or convincing practical effects and make-up.

All this makes me want to watch DragonSlayer.