I do not eat fast food as often as I once did (which was, like, a lot).  At some point my GI tract rebelled and said "no more", and so its a true rarity that I swing through a McDonalds, Wendy's, BK or other joint.  I don't care for Panda Express (like, seriously, guys, no.  Gross.), and Chik-Fil-A apparently hates Teh Gays, so I have an excuse not to eat there, which isn't really a problem since I burned out on them circa 2004.

But Taco Bell (and our regional Tex-Mex favorite, Taco Cabana) are still in light rotation.  Especially since Taco Bell quit insisting that I have to order a "Chicken Ranch Taco without Ranch sauce" in order to get a chicken soft taco.

Yes, the price at Taco Bell today is far, far more than the $0.59 I used to pay per taco back in college, but I am okay with paying $1.30 per taco if it means the workers are less likely to add spittle to my food.

Now, I am aware that what we call "Mexican Food" in the US varies regionally.  I was stunned by the differences when we moved to Arizona, and, of course, what they serve at the local places in AZ differs from what you're getting in Mexico City vs. elsewhere in Old Mexico.  But nowhere in Mexico did food ever look exactly like Taco Bell.  In fact, I'm not really sure where Taco Bell originated.  In fact, I recall laughing and laughing and laughing at a colleague from Chicago when she suggested she did not want Mexican food for lunch because she'd had Taco Bell for dinner the night before, which was an equation I don't think I would have made in a hundred years.

Similarly, I was well into college before I figured out that Doritos were supposed to suggest something about an origin in Mexican cuisine.  Sure, I saw that it said "nacho flavor" on the packaging, but still...  I'd always believed the consistency of the chips was necessary for heavy layer of the cheese dust from Mac'n'Cheese packages they used for "flavor".  Don't get me wrong, I love me a Dorito, but somewhere in the 1960's-era processed food blitz that generated them, somehow they created something entirely new en route to imitating Chips'n'Queso, which I assume was the inspiration.

But now, Taco Bell and Doritos, two bastard sons of the American cheap/ processed food wasteland have found one another in a nigh post-apocalyptic dining scenario.

I present to you (and I am not making this up) the Loco Taco from Taco Bell. 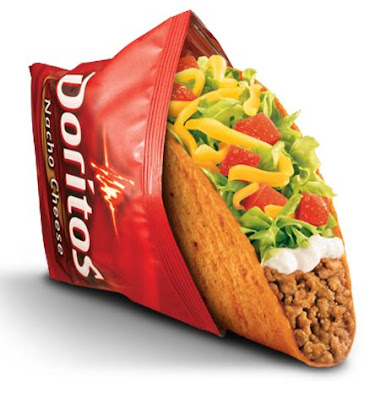 That is amazing.  That is a food stunt of the highest order that I did not think Taco Bell could top when they did the food stunt equivalent of jumping 10 flaming school buses on the back of a tricycle with their burrito stuffed with chili-cheese Fritos.*

I have not engaged in a Taste Test in many, many moons...  but it may be time.

For, like, $1.30, you could also participate.  Just go to your local Bell, order one or two of these up, indulge and send me your thoughts via email.

*seriously, just looking at the burrito menu at Taco Bell reminds me that the Surgeon General pleads with you not to consume any Taco Bell burrito products.  Choose life.

"Doritos [are] supposed to suggest something about an origin in Mexican cuisine."

This is totally news to me.

I know, right? But the Spanish "ito" ending to the name, I'm guessing someone was saying golden, or "de oro". And its little. So, Dorito?

Just a guess. I speak no Spanish.

But its clearly a nacho chip shape, and the flavor was always described as "nacho cheese" once "Cool Ranch" came on the scene. The imagery on the bags occasionally suggests a sort of Mexican Restaurant look.

If that doesn't blow your mind, Fritos were originally pitched as a Mexican corn chip with a kind of racist stereotype as a mascot, The Frito Bandito. Doritos are part of the Frito-Lay product line.