I learned long ago that watching anything new while you're sick is a pretty big mistake, and so rather than watch stuff I'll have to re-watch when I'm feeling better, I went for the comfort food of the Superman Blu-Ray set.  It had been a couple of years since I made my way through Superman III or IV, and so I busted out the Richard Pryor starring 1983 feature, one of the first movies I can recall my folks dropping me off for with Jason at the local cinema for us to watch on our lonesome. 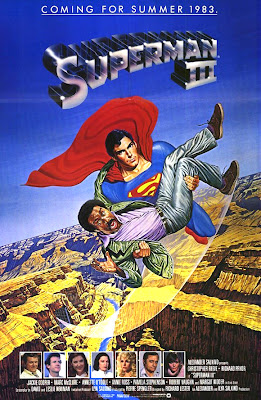 This movie was released at an interesting time in comics and in cinema, and its hard to not see the movie as a product of its time.  The overriding sentiment of the film is irrational technophobia, some of which is still kind of funny, I guess.  By this point my family had already had a VIC-20 (a predecessor of the Commodore 64) and would be purchasing an Apple IIe within two years.  This was also the same year that saw the release of WarGames to theaters, so it would be interesting to see the cover of Time and Newsweek from 1983 to see what my folks, then in their late 30's, would have been making of all this digital malarky.  The movie is basically about being very afraid of what the computers will decide to do once we depend on them, which made way more sense before the worst thing any of us thought a computer could do was lose all the files we hadn't backed up.

SUPER-BONUS:  This is also the movie that cuts away from Superman about to bed the movie's blond bombshell right to a shot of several oil pumps.  I give director Richard Lester a slow clap, as I've watched this movie a dozen times and never noticed that segue before.

What's curious about the movie is the absolute dedication the script has to some gags I'm not sure work terribly well.  He sets up Rube Goldberg device after Rube Goldberg device throughout the movie, from the opening sequence with the hapless citizens of Metropolis having a bad morning to the forced miscommunication between Lana Lang and Clark Kent, something that might have been cute once or twice, but instead plays like a stale Three's Company bit right through the film's finale.  Clearly Lester saw his cast as a sort of large ensemble group playing out some sort of broad comedy that never really sells.  Our villainous quartet is locked into a hand-waving farce of fools, which probably seemed hilarious on paper, and while Robert Vaughn is believable as the haughty corporate tycoon, I don't know that the slapstick around him pans out terribly well.


Honestly, knowing what I know now, some of the "Bad Superman" bits feel like the better Silver Age stories in which Superman goes bad and his maliciousness just never feels terribly evil.  But I almost feel like suggesting that was Lester's intention gives the man a bit too much credit.

All that said, the movie does have some good, actually... iconic bits.  I don't know anyone around my age who didn't get a little freaked out by Bad Superman's battle in the junkyard with Clark Kent, or who didn't have some minor psychic scarring from when sister Mona becomes one with the super-computer at the end of the film.  It also took the rather chaste sexuality of Superman II up a notch, and gave us a Superman who inspires imagery of oil pumps.  Or hard-drinkin' Superman.

I don't think its a mistake that following this movie DC's new take on Lex Luthor was that of a corporate behemoth rather than a mad scientist, a take that's resonated well for three decades at this point.  Wolfman and Byrne clearly saw the relevance in their re-jiggering of the DCU.  Nor is it that surprising that following this film we were introduced to the all-robot version of Brainiac, designed by George Perez.

On the whole, its easy to see why fans are willing to watch Superman III, but its such a tremendous fall from the heights of the two predecessors.  What's frustrating is that Reeve is actually pretty good.  Apparently nobody told him to phone it in, so the scenes which feature Superman (in all his forms) sell the rest of the movie.  Unfortunately he's not given a sounding board in the movie, and so there's a lot of watching Reeve's expressions and changes throughout the movie.


Anyway, it only begins to presage the insanity of Supergirl or the half-baked Superman IV, both of which have significantly greater narrative and directorial problems.

I'll just say it:  I have no idea why the Salkinds and Lester decided what they needed to sell this movie was Richard Pryor, certainly not an all-ages comedian, and who slips in one joke that makes the cut that, in 2012, I absolutely could not believe about what he sees as happening to him if he goes to prison.  I like Pryor in a lot of stuff, but no kid in 1983 was paying big bucks with the hopes that Richard Pryor was going to dominate the narrative of their Superman film.

I'm sorry. No one deserves this. Are you sure didn't get sick after watching this?

I just watched this about a month ago. I hadn't seen it since the 80s. I don't even know where to start. I honestly don't think I can say one nice thing about this movie. NOTHING works. The villains are terrible. The story is stupid. Richard Pryor is not funny, and not the least bit convincing as a computer genius. The script is a miracle, given that it somehow got greenlit. What surprises me is, given the huge success of its two predecessors, why is the budget so cheap? The overall production compares favorably to Meatballs sequel. The flying scenes, as well as all the SFX, were somehow worse even though one would assume FX technology would be better several years after the first to movies. Even the music sounds like the cut corners.

The one scene that had potential is the evil vs. good Superman fight. But it's so poorly realized (and mind-numbingly slow), that it's utterly uncompelling.

What's truly amazing is that the fourth movie is even worse.