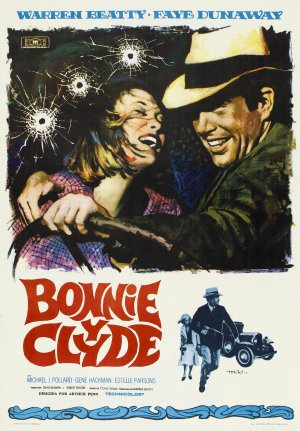 
By the time I was a kid, Warren Beatty was known primarily for his romances and I think I was in college before I figured out he'd been a serious actor, director, etc... at one point.  After all, the only Warren Beatty movie I'd intentionally sought out had been Dick Tracy.  But he's committed here, right along with other powerhouses like Gene Hackman, who plays Clyde's brother, Buck.**

And what can you say about Faye Dunaway in this movie?  She certain makes a beret seem like an excellent idea.  She's also very young, and very able to dig deep into the arc of the driven force of Bonnie Parker, who has the most complicated, mostly unspoken character arc of the film.  I mean, how many characters get scenes where their own mothers knowingly say goodbye to their poor, doomed daughters? 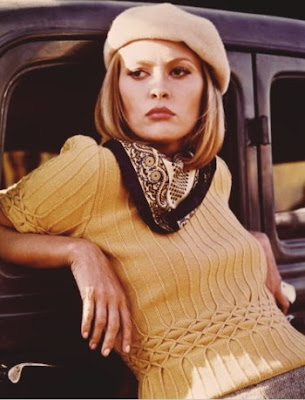 Before the movie (which I watched on Turner Classic) Robert Osborn mentioned the period in which the film was released, just as the wheels were beginning to come off in 1967 and the youth movement in the US was building (still two years away from 1969).  The push back against "the system" was becoming a very real thing, and while the movie ends as it must, the major difference between Bonnie and Clyde and Gun Crazy may be that there's little in the way of a play to make Peggy Cummins more than sexy, and she's never really portrayed as a protagonist, let alone romantically heroic.  But Bonnie and Clyde are pushing back against the squares and the law.  And what more romantic message for angry youth than that their love will martyr them?

The film is an American classic, and you don't need me telling you about it.  If you haven't seen it, we recommend.

*or at least Peggy Cummins in her cowgirl outfit
**have we had the Gene Hackman is the best ever discussion?  No?  Watch The Conversation, Unforgiven and Superman back to back, then get back to me.
Posted by The League at 5/31/2012 11:21:00 PM

If you haven't seen the 70's nastiness that is "Prime Cut", it is worth queueing. Gene Hackman is the baddie to Lee Marvin's not-so-good guy.

I haven't even heard about it, but I shall now be all over it.

I've been saving Bonne & Clyde for a rainy day, but your post reminds me that I need to hop to it :)