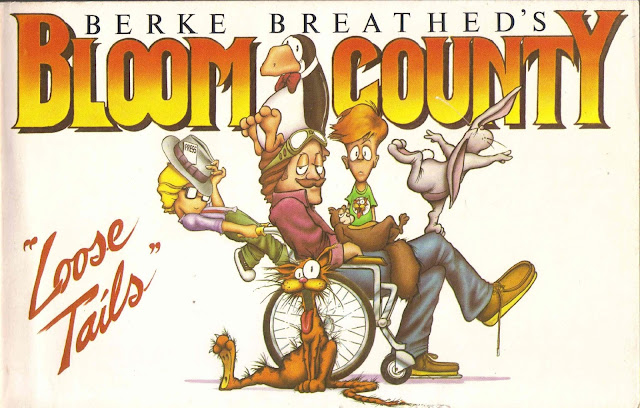 When people ask me what sort of politics my family had when I was growing up, the answer is probably somewhere between fiscal conservativism tempered with a heavy dose of Kennedy-era optimism, but the real answer is that nobody in my house seemed to give a @#$%.  We didn't sit at the dinner table bad-mouthing Reagan or Carter or Congress.  We were, I have realized, weirdly, atypically apolitical, and somewhere along the way - most likely from my Dad, though he'd deny it til his last breath - I think we developed an eye of suspicion early on for anyone of any stripe we thought was selling us something, and that included politicians, media talking heads and certainly anyone using an excess of Brylcreem and asking for money to get through the Pearly Gates.

Breathed certainly tilted left, but he wasn't shy about taking a jab at the more illogical or absurd tendencies of his own end of the spectrum.  He seemed more the detached observer, illustrating the absurd.  And that may have been what made me a fan most of all.

Bloom County was here to deliver The Truth:


Still, Bloom County wasn't exactly a political strip.  It was more of a... cultural commentary.  And unlike Doonesbury, which seemed aimed squarely at my parents' generation, if not my parents - who did not care for Doonesbury (Dad was more of a Beetle Bailey man), the talking animals, Star Trek indulgences, heavy metal riffs and boy-aged protagonists had an "all ages" appeal.  Frankly, it was also the window into how I understood a lot of the world of adults, politics, the news, etc... for a long time.  Nothing builds your vocabulary like trying to understand a strip about Casper Weinberger.  Snoopy was far, far less likely to be seen on a date with Jeanne Kirkpatrick and Hi and Lois weren't going to have anything to say about England invading The Falklands.

Pair this with 1980's Saturday Night Live, lots of reading the actual newspaper (man, I really miss doing that) and not being entirely impressed with most of humanity, and the appearance of media figures in Bloom County that so intersected with my already preconceived notions of what kind of the kinds of folks who cared so much about telling other people how to run their lives they ran for office, well...  It made for a certain worldview that I'm far closer to today than what I'd care to admit.

But, as I say, it was sometimes just a cultural reflection.  One week we might have Donald Trump's brain inserted into Bill the Cat, building gold plated litter boxes, and the next we might have Madonna stepping out of Binkley's anxiety closet.  Or Opus in his thanksless job as the ombudsman for the local paper.

Opus, originally introduced as a sight-gag when Binkley tried to adopt a German Shepard and came home with a penguin, was the break out star.  The innocent of the Meadow, he was the only character (other than Ronald Ann, a late addition) who asked why or who engaged with culture with thought, even naive, overly optimistic thought, but he was often the point of view of the person wishing for the best, but unsure what to make of the blustery nature of American discourse, dating, body image issues, and playing rhythm tuba in a short-lived but glorious band.

But Bloom County hung it up when I was 14.  Breathed wound up the strip, apparently tired of the grind.  It sort of returned immediately as Sunday strip known as Outland, and, later, Opus, but it was never exactly the same, what with so little Binkley, Milo, Steve Dallas - until Breathed brought them in later on in the series, just 'cause.  And even all that output stopped something like a good 10 years ago.

Breathed was actually a bit of a Texan, and actually attended UT Austin back in the 70's where he wrote and drew a strip, Academia Waltz for UT's student paper, The Daily Texan.  Recently, comics publisher IDW put out hadcover volumes of all of Breathed's work, minus Academia Waltz, but now even that is due to arrive soon.

The points here are:


Since Monday, Berkeley Breathed has posted two all new strips to his Facebook page (a third appeared Thursday morning).

I'm not watching this with the same dread with which I watched the almost certainly doomed reignition of Achewood.  The modern circus should be fertile ground for Breathed.  And the generation of teens and 20-somethings who were avid fans then are now older, paunchier and have money to spend to maybe help the strip remain alive, at least through the coming, sure to be ridiculous, election cycle.

We'll see.  Breathed is doing this entirely on his own.  There's not even a real release medium yet.  All he's done is post directly to facebook, not even bothered with much of a website (man, that thing looks positively homemade circa '03).

It's hard to imagine a comic strip today getting anyone upset, but during his tenure, Breathed managed to get crosswise with Donald Trump, Mary Kay Cosmetics and others.  Again, you have to remember, this was a popular syndicated strip.  Breathed's words were entering millions of homes every morning, arriving with the local paper, not something an audience self-selected to read, so much as the inevitable browsing while you sipped coffee.  So if he was making fun of you, people tended to notice.

I have all the reasonable reservations.  Breathed hasn't done this in a while.  His voice may have changed in the intervening years (though his first two strips feel so on, its like he never left).  He may get bored and quit, or get into a twitter scrape with someone and tell everyone to go to hell.  The business model might make no sense.  Who knows?

But for now its here, and until I see reason to think otherwise, I could not be happier its back in whatever form it winds up taking.

Oh man, this is the only reason I have to ever log into Facebook. My reading of Bloom County mirrors your own other than being introduced to it by an older brother. Rather I was a bored kid in a WH Smith's who picked it up to pass the time while my parents shopped and then fell instantly in love with it.

That punch line still kills me to this day.

I have to think Breathed has to be a little surprised at the impact he had on a generation of suburban kids, now adults. Even if we just get 6 months of strips out of this, I'm totally jazzed.

If I get a week of strips I'll be over the moon!

This is probably an even bigger deal than when Bill Watterson drew a few "Pearls Before Swines" strips.

Somehow, and I don't know how, I didn't hear about the Pearls Before Swines strips until reading an article on the return of Breathed. Need to look those up.

Bloom County! That strip meant so much to me growing up - and the return is totally on form (better than Outland so far). Looks like facebook is good for something after all . . .