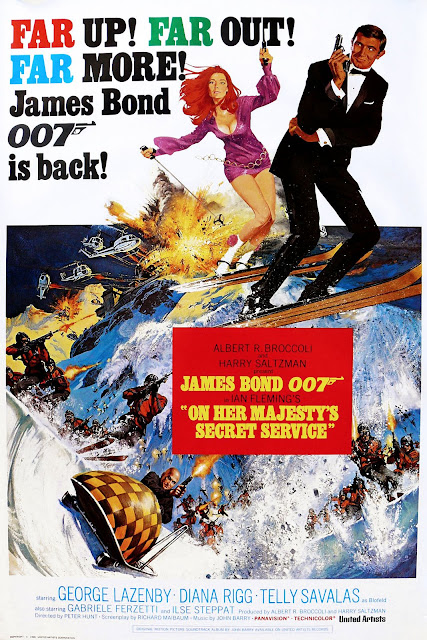 On the whole, I enjoyed the movie well enough.  Lazenby is pretty good in the action sequences, which show the change in film from the early 1960's to 1969.  But he's just not my favorite actor, and not my favorite Bond, falling somewhere around Pierce Brosnan.  He always seems surprised to be in every scene or something, and seems less likely to just stab you with a salad fork than Connery (and certainly Craig).  Still, he can throw a punch, looks confident with a machine gun and can wear a ridiculous tuxedo without looking like a maniac.

Bond, in Argentina, sees a young woman about to drown herself and saves her (Diana Rigg).   The woman's father is a notorious international crimelord, but smaller scale than Bond's usual target, Blofeld.  Her father offers to help Bond find Blofeld if he'll woo and marry his daughter so she'll calm the hell down, I guess.  It doesn't make a lot of sense.

Bond and Tracy, Rigg's character, fall in love-ish, and then Bond is off to Switzerland posing as a genealogist who Blofeld has hired to help him secure a Count-ship.  Yes, there are amazing ski-chases at some point.  There's a plot to use brain-washed young women to destroy the world's agriculture, some sexing at high altitudes, Telly Savalas as Blofeld, and not really enough Diana Rigg for my dollar.  After years of work on The Avengers, she does know her way around an action sequence, I'll give her that.

But I don't necessarily see why folks seem to like this one in particular.  It was okay, certainly, and had impact on the series, but I prefer the Connery films that led up to this one, I guess.

"This was the one starring George Lazenby, the man who was not asked back"

Lazenby was offered a seven-film contract in fact, but he quit after one, due to believing that the franchise itself was archaic and on the way out. There's some good quotes on Wikipedia from him about this, but is the most elaborate:

"Fantasy doesn't interest me. Reality does. Anyone who's in touch with the kids knows what's happening, knows the mood. Watch pop music and learn what's going to happen. Most film-makers don't watch and aren't in touch. People aren't going to films because film-makers are putting out films people don't want to see. As for the so-called "Tomorrow movies" they are only tomorrow movies with yesterday directors ... Actors aren't all that important. Directors are. I'm terribly impressed with Dennis Hopper. I'd like to work for him. I also like Arthur Penn, John Schlesinger and Peter Yates ... What I'm going to do is look for a great director first, a good screenplay second. Meanwhile, no more Bond. I make better money doing commercials."

As for the film itself, it's one of my favourite Bond films. I like the more grounded tone, the absence of wacky gadgets, and the fight scenes that seem almost a precursor to Paul Greengrass' Bourne films at times -- they're punchy and sharply-edited. It's a solid film.

I have no idea what happened to it, but I had a paragraph written about the fight sequences. And it's not there. I must have erased it and not re-written it. This is what happens when I pound these things out quickly between movie and bedtime.

Anyway, I completely agree about the fight scenes. The only other Bond fights I can compare it to are the Robert Shaw train-scene fight in, I think, "From Russia with Love" and then you have to jump all the way to Daniel Craig's stairwell fight in Casino Royale. You never saw even Timothy Dalton throw a punch like that.

I'll come down in favor of cool spy cars and watches with darts built into them, but not to the point of science fiction or plots hinging on them. I mean, we know there have been disguised weapons used by the CIA for decades.

I just didn't really dig Lazenby all that much. Wish I could say I did. It's interesting to see the quote and see someone this aware of what was happening in movies in 1969 thrown into the role and deciding it wasn't for him. Those were some astute observations about that era of filmmaking. It's kind of too bad he didn't make his mark outside of Bond (that I know of).

I can't recall if we've talked about my love for the Fleming Bond. I grew up with the movies in a sense and liked Connery but didn't love the Bond films 100% because I like the spy element - hate the romance.

So after watching - and adoring - Casino Royale, I read the books. And wow. I mean there's innuendo and all, but the books and films are two totally different Bonds. So I've been pleased with the darker direction of Bond, overall. Can't wait for November and the new film.

But it also means that reading the books and then watching the corresponding film (which I did with several) is a pretty interesting and laughable experience. I'd recommend it.

It's not a bad idea. I'll wrap up the Parker series soon, so I'll need something else to start, and I've certainly always been curious about pure Fleming. I've heard about the differences here and there, just like I'm well aware of differences with Superman from medium to medium, era to era. But, yeah. Is Casino Royale the first book then?

"I just didn't really dig Lazenby all that much"

He's definitely the weakest aspect of the film. It's a shame we never saw him grow into the role.

Oh! And the film's soundtrack/score are both also pretty good.

yeah, I liked the score. John Barry? And the Louis Armstrong tune. But was a little non-lussed by the opening sequence song. Not horrible, but not exactly "Skyfall".