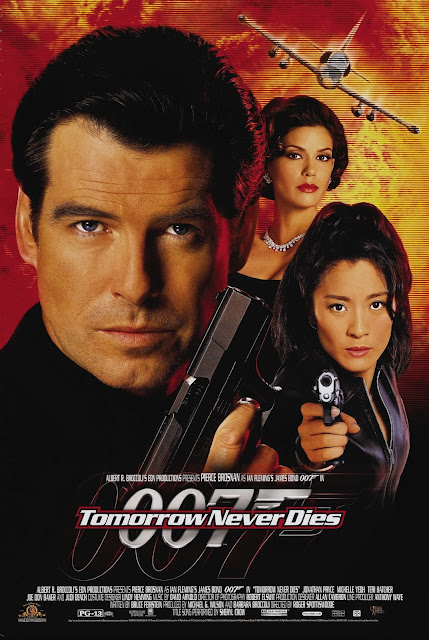 Our plot: A William Randolph Heart meets Ted Turner meets Bill Gates figure is manipulating the world media by causing incidents and being first to report on those incidents. His latest scheme includes a stealth boat (say that out loud. It’s fun! *stealth boat*) that starts an incident between China and Britain in order to cause a war between the two nations that he can report on and push up those sweet, sweet cable TV ratings and newspaper circulation.

In 1997, not many people knew about GPS, and the plot hinges on the nefarious Carver (Pryce) and his toady (Ricky Jay of all people) manipulating the GPS system to confuse the British Navy as to their sunken vessel’s location.*

Bond used to, uh “date” his wife (Teri Hatcher), and so they reconnect as he seeks information about what Carver is up to. The two share a past where you realize Bond and she got closer than he usually gets with a woman (must have been three whole dates), and it serves to both flesh Bond out a bit more than as a caricature and draw the broken character of the books a bit more into the movie version. One can see how actors would find this more appealing than “you kill five guys with a novelty explosive then say something quippy”. At some point, you don’t want to be playing a Looney Tune.

Bond stumbles across Agent Wai Lin (Yeoh) of the Chine governments opposite of the CIA. She’s also looking into the incident and tracked some shady dealings back to Carver.

Of course the two pair up, and action ensues.

I don’t really need to spend much time re-hashing how Hong Kong action was infiltrating American video rental shops thanks to director John Woo and the might of Jackie Chan. For some reason there was a regular Hong Kong cinema series (on full 35mm!) at one of the two movie theaters that used to sit on the UT campus. If you were up for bats flying around your head while you watched a movie, this was the place to be on weekends when I was living on and near campus. At some point JAL took me to see Super Cop 2 and Heroic Trio, and I was all in for Michelle Yeoh.

Hatcher’s entire role in the movie is pretty telegraphed if you know your Bond. She’s to leave a beautiful corpse for Bond to avenge. Yeoh’s role is a lot more complicated and is arguably a turning point for the series and part of why I walked away from Bond for the next film.

The movie needs for Bond to be our Alpha Male hero, but they’ve hired Michelle Yeoh who can carry a movie and action sequence all on her own, and who is, frankly, far more interesting to watch than Pierce Brosnan toting around a submachinegun. Westerners unfamiliar with her martial arts prowess and stunts were surely pleased to see her keeping up with Bond in a way that was unprecedented in the series, even when he was wooing Soviet agents.

That said, there’s a curious scene in which Carver mocks her martial arts, and as Jamie pointed out as soon as the movie ended “they should have done something with that” – as in, she never gets in a sweet kick to Carver’s head before he meets his end. Seems like a wasted opportunity.  Of course it feels steeped in racism, but this is a character who is about to send a missile into the heart of Beijing, so it doesn't feel that weird that maybe this guy isn't exactly working on a better understanding of people's feelings.

As the movie is 20 years old, it’s interesting to see the start of the shift in cinema where we no longer blink at all at women starring in or co-starring as action heroes. I’m not saying women get equal billing or the numbers even out, but you can probably name two or three franchises centered around a female action star, and you certainly don’t expect expect Wonder Woman to let Steve do all the heavy lifting in cinemas this summer.

I'm also surprised by how much I like Pierce Brosnan as Bond.  He's maybe too handsome for the role (but perfect for The Thomas Crowne Affair).

In addition to the 1990’s-ness of Michelle Yeoh as novelty, the Saigon sequences feel imported from a Jackie Chan movie with the outrageousness of the stunts. You also have technology as the centerpiece of the film and the digital age of the media and the impact of massive media conglomerates was also very much on people’s minds.  Certainly more than shipping tycoons or the 20th-Century-laden first careers of many a Bond villain.  Evil geniuses had to know how to manipulate technology (see Alan Cumming’s hacker in GoldenEye), but the actors playing these whizzes never know how to type. Using a computer every day wasn’t all that common quite yet. You can literally see them just flailing their fingers around a keyboard nonsensically to indicate they’re super-fast at typing and therefore good at technology.

Anyway, if it’s been a while since you watched Tomorrow Never Dies, it’s better than I remember. And, Michelle Yeoh.


*GPS was a new idea to most people so there's a sort of nickel explanation of the concept and then heavy, heavy use of the acronym.  In fact, a decent drinking game could be made for this movie in which you take a drink each time they say "GPS".
Posted by The League at 1/22/2017 11:29:00 AM

It's interesting that you brought up women's roles in action films in the 1990s. I have started watching some of Cynthia Rothrock's films. Now, she's not the greatest actress, but she proved her worth as an action star many times over in the late 80s and throughout the 90s.

A retrospective of some of Ms. Rothrock's films may be of interest to a B-Movie lover. I have a sense that there's a lot going on in the social mindset during this time, with the transition from the Arnold and Stallone style films of the 80s over to the Hong Kong influenced films of the 90s.

So crazy you brought that up. Just last week I said to Jamie "we need to check out some of Cynthia Rothrock's movies" and she said "who?" and I said "you shall see. You shall see." I mostly saw her movies on late night basic cable, but I certainly remember her well.

Unfortunately, the people who fit the label "female action movie star of the 80s" is a pretty short list, which I believe says something about the times. Now, I'm not very good at names or at movie trivia, but off the top of my head, I'd say it's not much beyond Linda Hamilton, Grace Jones, Cynthia Rothrock, Sandhal Bergman, and Brigitte Nielsen.

I imagine the mold only really broke once Lucy Lawless showed us her Xena. Man, do I ever go off topic.

Man, I realized a while back that my Bond reviews were more or less turning into a "what are the women in this film doing?" check-in a while back. So, very much on topic.

Let's add Ripley to that list and maybe Princess Leia. Even at the march I saw women in Ripley shirts and the Princess/ General Leia imagery was EVERYWHERE.

You may be right on Xena. She had the full action star thing going on while Janeway was over commanding starships. Seems like we could get a TV movie or two out of Lawless as Xena. Maybe a Netflix short run. She's still 6' of awesome.

But, yeah, the 1980's was mostly about how women were MacGuffins male action heroes. As we should all do - look to "Commando" for what was going on in action movies of the era and poor Rae Dawn Chong left to scream helplessly as Arnie blows things up.