blogger's note:  For some reason, this post gets a lot of traffic.  Can someone tell me how you got to this page?  I find the hit count on this post perplexing.

I just finished the audiobook of the Dennis Lehane novel Mystic River, the basis for the 2003 film which drew plum nominations and won a few Academy Awards (and which earned a bucketload of other awards).

Frankly, I never saw the movie, and I really had no idea what either the book or movie were about.  No, I have no recollection of 2003 and what I was doing.  Working, I guess.

There's a guy who works security sometimes in the building where I show up every day, and I think his story is that he does security as his day job (because he can sit there and read), and he goes home and works on his own crime novels.  I admire the hell out of that, and he recommended the book to me about two years ago, and so I finally got around to reading/ listening to Mystic River this year. 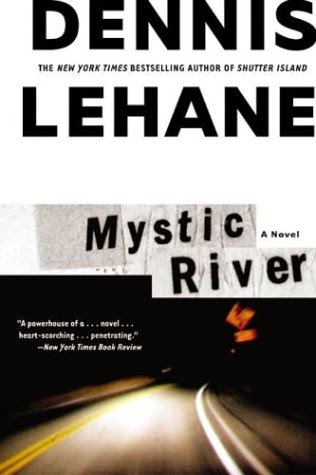 Audiobooks are a strange experience.  You're dealing with an actor's interpretation of how this should be read, and sometimes I just feel like maybe the reader missed the mark.  And, this may have been one of those times.  I think he went for "overwrought" and melodramatic when, maybe, he could have pulled it back a bit for a different impact.  I believe I listened to Scott Brick, who also read The Devil in the White City, which I listened to last year, and which I felt was fine, if memory serves.  But this book required a lot more acting and interpretation.

I don't know how I felt about the book.  I guess I'm a little surprised this particular story was thought of so well as to earn Oscar nominations, so I'd like to see the movie soon to see how it worked as Oscar bair.  And it certainly is not the first time a book that maybe wasn't the most inspiring source material worked stunningly well as a movie.  This was certainly nowhere near my favorite book, but what it did, it did well.


I'll quit BSing around and just say - I more or less figured out the mystery earlier than I assume the author intended.  That sort of thing impacts your enjoyment of the remainder of the story as you start getting ready to wrap it up before the story is ready to do so - something a bit more punishing when you've lost track of how many hours you've got left on the audiobook.   That said, I kept wondering if the reader deducing the mystery was the author's intention, or if that wasn't really that important to what he was trying to accomplish, or if I should quit my day job and take up sleuthing as a career.

Here's the thing, I never really felt like the mystery itself was what Lehane was up to in writing this book.

In screenwriting class, one of the rules is "show, don't tell".  Don't have the character say "I love chocolate cake!"  Show the character going to town on a slab of chocolate cake.  This doesn't necessarily apply to prose or the novel format, which allows for all sorts of perspectives and points of view.  The past few years I've been reading so much Richard Stark and Dashiell Hammett - who are extremely factual in their presentation - that I began to realize, as Lehane delved into the nervous tics and innermost thoughts of his characters - provided flashback and explicit description of character's thoughts and feelings - it's been completely beaten into my brain that show-don't-tell may be part of the genre of crime fiction.  But there's no real reason that should be true if you're writing from a 3rd person omniscient viewpoint.  That's just an opinion I formed at some point.

Perhaps Lehane uses the structure of a crime book and the mystery that carries us along, to look deeply at the characters, to let us into their skulls to kick around from the ever-shifting perspective of the omniscient narrator.  But there's also an immediacy to the descriptions and a focus on the visceral responses of everyone involved in a story where a bad thing happened once, and a whole lot of bad things happen in the present of about the year 2000.

The story itself is small enough that it remains deeply personal.  But there were tangents here and there I felt were going somehwere that never really materialized and were just part of the scenery of the tragedy that kicks off the end of the 1st act.  Lots of chatter about the transitioning of the neighborhood (something I can relate to) that seemed to not tie in either thematically or plotwise.

But here's the thing - people love this book and they went bonkers for the movie.  In a while, I'll give the movie a shot and we'll see what we can see.

While I didn't feel the reader did an abysmal job (I've quit on books where I just couldn't stand the reader), I'll reiterate that I'm not sure he hit the same tone I suspect the author intended.  It just wasn't that hard to imagine a different reading that made a bit more sense.

I won't go into it so you can watch the movie relatively clear-minded, but I thought the movie was terrible. I've never read the book, so I don't know if it was the adaptation or the source, but just dreadful.

I'll tag the movie with a mental note to get back to you. I did watch the trailer and it used exact dialog from the book - and that was dialog I found kind of stilted and unnatural in the novel - which always hits the ear weird when it's being read by an actor versus just your eyeballs.

And as movies are supposed to show rather than tell, if the book was about the inner experiences of the characters, that's a tough thing to bring to the big screen.