It had been a while since we watched 2011's Captain America (or, Captain America: The First Avenger, if you want to get fancy).  I mean, not that long a while, but we kind of forgot to watch it to get prepped for Agent Carter, which, it seems, people aren't watching in significant numbers.

Which... what are you people doing out there?  Stop watching CSI. 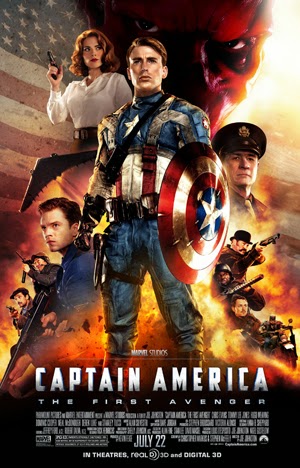 If you saw Captain America 2 this summer, the difference between the two movies is certainly striking.  One a warm-hearted nostalgic superhero romp in a world of skeleton-faced villains and good guys on one side and bad guys in black jodhpurs.  Heck, it's got a musical number.  And, of course, Cap 2 being all about the excesses and compromised values of shadow wars and secret power grabs.

I don't have much to add.  You guys know I'm in the bag for the Cap movies.

I'm still glad Marvel didn't see any reason they needed to make Cap edgy or extreme or whatever.  Even in the context of our throwback-nostalgic-era of the movie which people still like to think of in Capra-esque terms, and which the movie plays to, Steve is the idealist to the point of getting beat up on the regular for standing up for himself and for pushing back against bullies.  That adherence to ideals is refreshing not just in this movie, but puts Rogers on a whole other level, giving his allies something to cling to in the storm in the sequel.  It would have been great to see a bit more of Steve Rogers as baritone voiced leader and less as buddy-calling-on-his-friends in the first installment, because I think that informed a bit about how Cap was made the hapless straightman a bit in Avengers.   But Cap 2 certainly took a different tack on that, and I expect something different in the coming Avengers sequel.

And, of course, the movie introduced us to Agent Carter played by Haley Atwell, and that is a very good thing.

I knew nothing going into this film and then just loved everything about it. Granted, I'm a sucker for the period, but the change from patriotic plaything to real change maker was awesome.