I don't think I've watched The Hunger (1983) since I was living with pal CarlaBeth back in college, so - wow, almost 20 years ago.  Which means that Jamie, who I started dating at the time, has been saying "The Hunger of David Bowie!" then "I sure do fancy a cheeseburger!" at me in an iffy British accent for almost two decades.

My, how time passes.

Which is exactly what this movie is about, by the way. 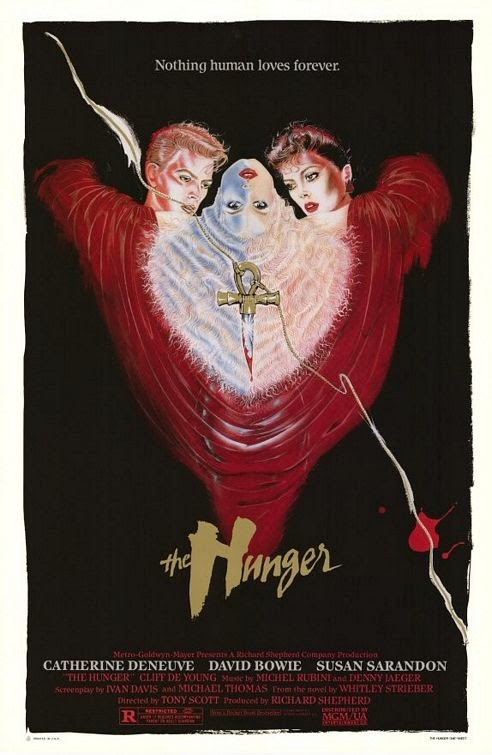 I was a bit surprised to see the movie show up on Turner Classic.  I mean, yeah, it's more than 3 decades old, but I have no recollection of TCM previously throwing caution to the wind and going ahead and showing partial nudity or that much blood.  And, this being a vampire movie, boy howdy is there a lot of blood.  And Bauhaus!  Those Andy Hardy movies are way low on their offering of Bauhaus.


The movie is a sort of "wow, the 80's" explosion, just from a casting standpoint alone.  Want to see a pre-fame Willem Defoe in a one line role harassing Susan Sarandon at a phone booth?  CHECK.  Dan Hedeya as a worn-out NYPD detective with the most terrifying five o'clock shadow you'll see on this world or any other?  CHECK.  Ann Magnuson in an early role?  CHECK.

Heck, it's directed by Tony Scott before he applied Tom Cruise to a standard issue old school airplane movie and called it Top Gun.  Some of those artier moments in Top Gun with the well-lit lovemaking, meaningful glances, etc... were in full-effect in this movie, which sometimes has the exact 80's feel you know from music videos like Bonnie Tyler's "Total Eclipse of the Heart".

If you people think I'm not always looking for a reason to embed "Total Eclipse of the Heart" into every post, my friends, you are very, very wrong.

The plot to The Hunger is so basic, even a recap would more or less blow it, but let's just say that Catherine Deneuve is a very old vampire who likes companionship, and when David Bowie - her current paramour - begins to have issues, she sets her eyes on Susan Sarandon.  But it does deal in the very, very long life of a vampire and the gut desire of us all to remain young (and, if you're a lead in this cast, beautiful).  But even for the ancient, time passes, and it has it's effects.

I'd say this movie would never get made today, but Jim Jarmusch's 2014 film Only Lovers Left Alive might be a bit of a spiritual antecedent to The Hunger, if much more of a Jarmusch film than an 80's tone poem/ mood piece.  But any studio remake would be a nightmare of bad nu-metal and sparkly, awkward sexuality toned down to a PG-13.

It's a melodrama, a horror film in the manner of personal horror or body horror, it's oddly sexually exploitive, it was cutting edge for the vampire genre and doesn't really get the credit for that it deserves, and it's oddly smart and very pretty to look at.  Those Scott brothers know their art design.

Your mileage will vary with the movie.  Either you're going to be able to shake off the 80's-ness of the film, or the plodding pacing will bore you.  Neither impacts me much either way, and I think Sarandon is actually quite good in the movie.