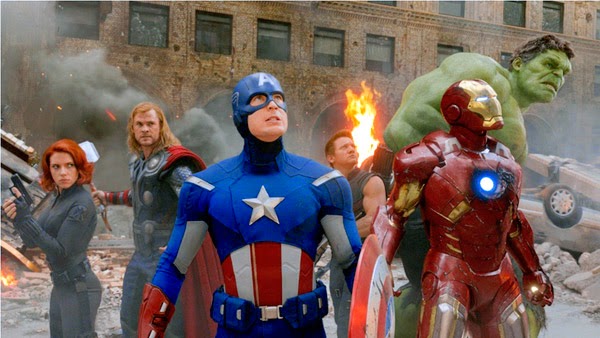 What are you going to say about Avengers three years later and with 90% of the world's population now well aware of the exploits of Earth's Mightiest Heroes?  We watched it to get caught up for Age of Ultron, but I am realizing it's been a while since I've seen Thor II, and I don't own a copy of either Thor for some reason.  No, really, I like the Thor movie a lot.  They're super fun.

Of all the Marvel movies, I'm still not sure this one is even in my top 4.  It counts on the fact you really don't care that Loki's plan makes no sense whatsoever in order to keep up with the movie, and Loki makes his escape in the opening sequence from the back of a pick-up truck, like there should be banjo music playing.  There are some choices made that maybe weren't the best in retrospect, and there's a lot of standing around on the heli-carrier.  I mean, a lot of it.

The thing is, despite what I think are some scripting problems, editing decisions that could have been made differently, and the fact it features my least favorite of Caps' costumes (I really dig what I've seen in the trailer for Age of Ultron), it's still got so many good parts, you can overlook the deficiencies and still like it quite a lot.  If nothing else, the actors are all very specific and on-point in their performances.  That sort of team-effort in a movie can be what makes the difference making your Star Wars franchise hum versus the endless sea of forgotten franchises that had teams but focused entirely too much on any one character (I still remember being surprised when I read as a kid that Star Wars was Luke's story.  Of course it is, but, you know, I thought of him as one of a bunch of people) or where the actors lacked chemistry.

Anyway, it's big-screen fun, and it really does tie in with the movies before and after so seamlessly - if you ignore the useless army of forgettable villains and their ridiculous scheme.  But it doesn't matter, it does give our heroes something to overcome and come together, and that's what the movie is all about.
Posted by The League at 4/25/2015 12:16:00 AM