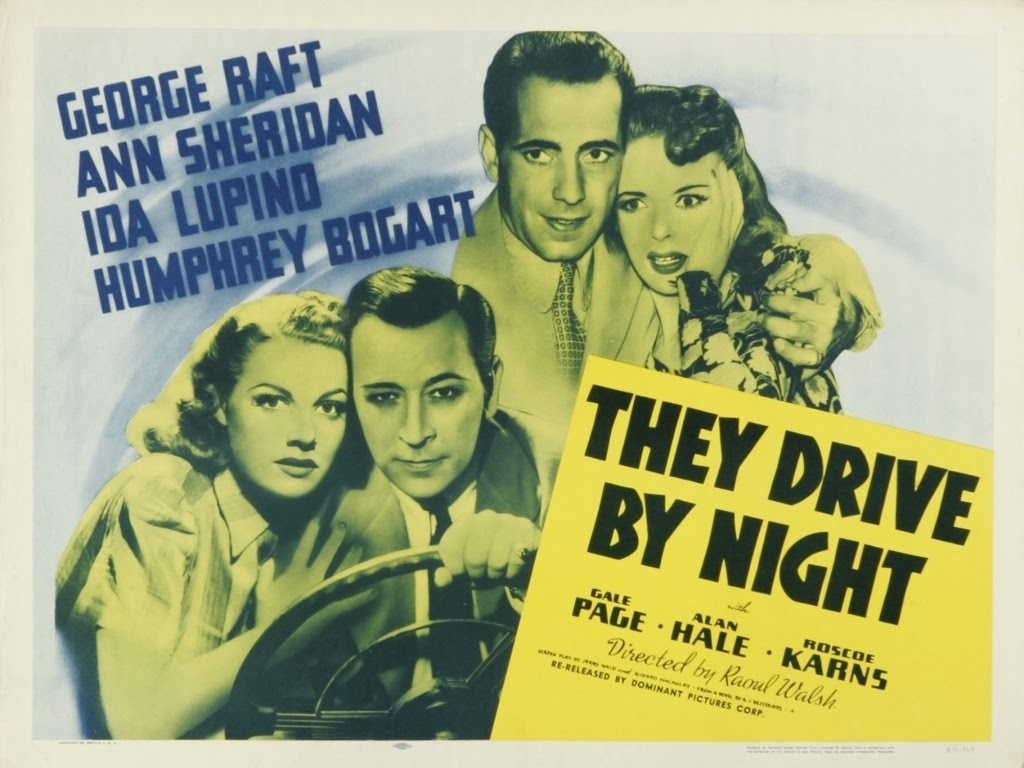 Released in that precarious period as the Depression wore on, but while America hadn't yet stepped up and become involved in the wars brewing across the rest of the planet, They Drive By Night (1940) sits at an interesting crossroads.  It certainly features the sort of crime-story from the pulps of the 20's and 30's, but doesn't delve as deeply into moral ambiguity of the post-war film noir pictures nor a good Chandler or Hammett story.

Even the actors are at an interesting period in their careers.  Raft plays the lead and Bogart takes the back seat as his brother, Bogart becoming Hollywood royalty only a year later with The Maltese Falcon and Casablanca in 1942.  Raft certainly continued on as a popular actor for some time, but only one would remain a household name.  Ann Sheridan was also very popular during the era, but Lupino was just breaking out from the blonde dye and good-girl roles she'd been playing.  And she's really damn good here in a Femme Fatale role that casts the movie squarely into the categorization of film noir, even if it's a bit early for the genre (no doubt a version of this in the 1950's would have allowed Raft and Lupino to knock-boots off screen).


The poster is a little weird.  I'm not even sure Lupino and Bogart ever have a scene together - a shame, because they're great together the next year in High Sierra.  It certainly does nothing to suggest the actual story of working class guys trying to realize the American Dream that is, really, the main through-line of the film.

The movie follows a pair of brothers in a just-post Grapes of Wrath California trying to make it as independent truckers, hauling farm product down to Los Angeles from northern California.  It's a dangerous route, compounded by the reality that the more runs they make, the more likely they are to get ahead - and so neither they nor any of their peers are being safe enough nor sleeping enough.  We learn that a married Ida Lupino has her eyes on Raft, who isn't taking the bait (especially since meeting Sheridan).  But after a tragedy, Raft takes a position with Lupino's husband's company helping to manage his trucking fleet.

And then things get bad.

The movie feels oddly divided between the trucking section (which features Charles Halton playing, shocker, a stuffy accountant type) and the section with Raft at Carlsen Trucking, but it's not like it doesn't make sense.  The conclusion of the film may be the most interesting part, mostly thanks to Lupino turning it up to 11 and insisting audiences pay attention.

I'm not sure the rest of the movie is as good as Lupino, but it's worth a spin sometime.