So, Miller is making it a Dark Knight Trilogy? All righty, then.

What do you even say when you see DC has signed up Frank Miller to create a third installment in the vein of Dark Knight Returns/ Dark Knight Strikes Again?  I think you say "DC needs a hit for the 3rd Quarter or Dan Didio will need a new jobby job." 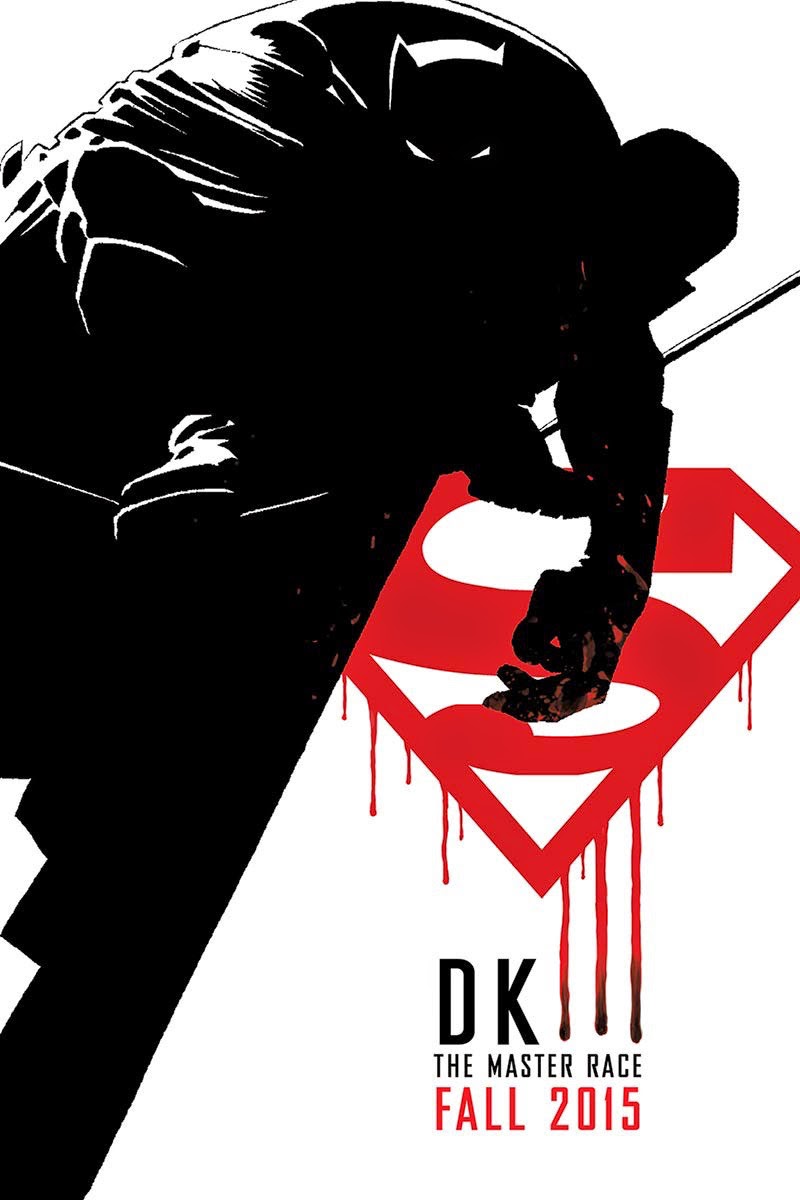 And that's okay.  I'm a little past the point of hoping that DC Entertainment, a division of Time Warner, Inc., is really all that invested in the artistry of comics in 2015, but it's not like comics haven't recycled ideas before.  These sorts of short term stunts have generally paid off for Didio, and he's certainly running out of his usual bag of tricks now that he's exploited all of his predecessor's successes so many times over that he had to throw bags of gold at Frank Miller (or really pray Sin City 2 would do exactly what it did at the box office) in order to get him back at DC writing comics.

Didio has already finished sifting through the pockets of the corpse that is Watchmen, had Snyder plod through Miller's Year One for a year, repeated Crisis over again five times...  he's out of other people's ideas.  Time to rehire Miller and see if he can't move some comics. Get Azzarello and his misanthropy in there, and his kind of boring take on Gotham (I still remember Broken City.  Yeesh.) and we're golden!

Here's the thing: he will sell hundreds of thousands of that first issue.  I mean, I'll be picking it up.  Call it morbid curiosity, call it what you will, but if this isn't a $5 an issue comic (and it probably is) then I'm in.  If it's $5... well...  that's why they invented trade paperbacks and discounts on such.

Like a lot of Gen X'ers, I got deeply into comics and stayed with them partially by always chasing that high I got reading Dark Knight Returns  - a high I'm always shocked is still with me when I pull it off the shelf 30 years later and flip through the pages.  I'll always stand by that book, so, younger readers, don't come at me and tell me the book doesn't work like I see you doing online.  You just sound stupid, kid.

The sequel we all thought we wanted, but then we go it, Dark Knight Strikes Again, is a fascinating mess.   You kind of think you know where it's headed, and while Miller was working on it, all of a sudden, in the very real world in the very real city where Frank Miller lived and worked, terrorists flew some planes into the World Trade Center and everyone freaked out so much that, well, I suggest reading every newspaper from every day from Sep. 12, 2001 to today.

Miller, who was apparently making up his comic as it went along, also freaked out and all of a sudden no new issues came out for a while.  I didn't blame him then, I just hoped he'd actually finish.  And when he did come back, the tone and manic energy of the story had completely changed.  Whatever had been the narrative seemed lost to a new, furious, messy take of the DCU that seemed rushed and poorly structured.  The formalism that marked Dark Knight Returns and so much of Miller's work like Ronin and Elektra seemed absent.  The pacing and control of the Sin City work had evaporated.   Now it was all trying to get it done before the apocalypse that seemed to be about to occur in every page of the final issues.

I'm not sure it was ever good, exactly, but it was a fairly low cost of entry to see Miller become unhinged mid-comic.

So... All Star Batman.  It was... different.  It seemed to be admitting that maybe Batman is a bit of an asshole in a way that, you know, if you're kidnapping kids and indoctrinating them into your personal war against people who are not billionaires, well, maybe you're not made of sunshine and puppy dog tails.  Miller never had a problem with Batman as fascist, and this comic tilted that way in a manner that, you know, at least it was different.  And maybe a little more honest.

I don't necessarily think of the DC superheroes as the shambling messes of All Star Batman, but I was giving Miller a pass until we got to the end and I could see where he was headed.  Which...

It just quit coming out, and that was that.  Nothing to be done about it.  Yeah, I hated the way he was dealing with Superman in the series, but I don't really expect him to deal well with the character given his particular POV.

A lot has been made of Miller's state of mind the past decade.  Folks say he isn't well and point to Holy Terror as evidence, which is disingenuous and/or naive.  Some people just have certain political opinions or ways of processing the world.  If half my relatives on facebook are any indication, Miller isn't exactly alone in his opinions - he just has a bigger platform.

In some ways, Miller is the one guy out there not acting like an apologist for what we should know by the age of 25 or so is, at it's core, a problematic idea.  If we found out some East Coast rich guy was driving around in a black car and hitting mental cases with crow bars, we'd call him Patrick Bateman, not Batman.  A Wonder Woman coming from an island of militants might have a perspective different from the one pitched by Marston.

I've written before how I more or less point to the work of Miller for why DC fumbled their ownership and management of Superman over the past 30 years.  But I don't really blame Miller himself.  He definitely has his ideas for what Superman should be and has a problem with the take as the Big Blue Boyscout.  He wants neither a Superman kowtowing to a paper tiger government nor a Superman acting as a simp, running around doing favors for others.  His conclusion to Dark Knight Strikes Again seemed, at the time, to suggest that Superman should be out there taking control of the planet, and idea which seems obviated by the very title of the new series, The Master Race, and the bloody Superman logo.  But who knows?

At the end of the day, even when I firmly disagree with Miller vis-a-vis his worldview or his take on a particular DC character or two, he's writing challenging comics.  That's sure as hell not something you can say about DC Comics the past five years or so.  If nothing else, we can get a chance to remember what grim'n'gritty actually looks like when it's not a photocopy of a photocopy of better work - in fact, a seminal work of the 20th Century, not just in comics but a keystone to the post-WWII American culture that carried impact well outside comics and even cinema.

Unfortunately, that Jared Leto photo as The Joker with the tragically hilarious Ed Hardy ink is kind of where you wind up when you keep asking people in mansions to keep things edgy.

If the new Dark Knight comic is a weird screed like his Angry Grandpa anti-Occupier rant, well, that's what Azzarello is there for, I assume.  He can be the leash on Miller's worse angels.  That said, Azzarello can be hit or miss when it comes to capes and tights and seems to have certain opinions about superheroes that aren't Batman, so... you know, we'll see.  Of course I've considered that I'll hate the whole thing.  It just might not be for the same reasons as the kids on the message boards.  Or it could be for exactly the same reasons.

There's a lot of dominoes that have to fall before we get to the end of the promised 8th issue, and with Miller, there are no guarantees.  No matter what, it should be colorful to watch.