I am not a Tom Cruise fan.  I think the first Mission Impossible movie started my turn on the guy, but I remember just groaning my way through The Last Samurai, and I've mostly only seen Cruise movies under duress for about a decade.  I'm sure many of you feel the same way about some actors that I like, but you're wrong, and you're going to have to live with that knowledge. 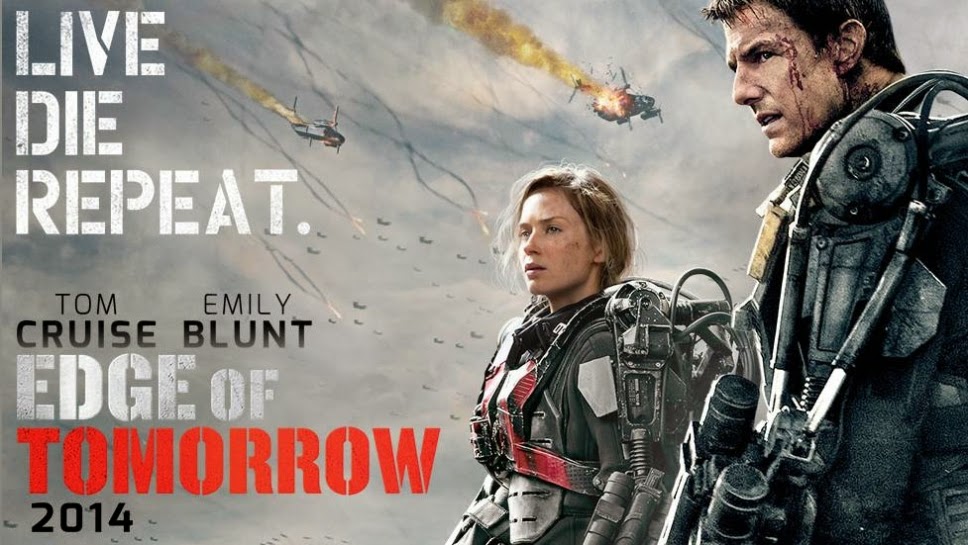 So it was that I had no intention of seeing Edge of Tomorrow (2014).  And, apparently, I wasn't alone, because it tanked so hard at the box office that they retitled the movie for the home video release to the, let's be honest, entirely more accurate Live. Die. Repeat.

And then you people all started saying "yeah, no, I saw that thing twice in the theater" and "it's way, way better than you'd expect".   And because I actually do listen to you people from time to time, and I have HBO, I gave it a whirl.

The movie is a curious mix of Groundhog Day and watching someone else play (badly) through a video game, which doesn't really sell the movie, but that's what I've got.  And it's both a strength and weakness of the movie.  It's a novel concept to see Tom Cruise get killed over and over only to pop up alive again with the knowledge he's gained and be able to move forward, or sideways, or whatever direction will keep him alive a bit longer.

And, like a video game, there's not much in the way of character development or complexity to the story beyond the conceit.  It's a sort of very interesting two hour movie parlor trick that, I think, mostly works very well.  But, nonetheless, it barely holds itself together, assuming thousands of deaths for the same person would not have left them a quivering mess, or the sheer repetition would not have driven him mad to the point of embracing annihilation.

This truly does feel like the first movie I've seen by the generation of people raised on video games to the point where the structure of the game is, in itself, part of the narrative.  Like I said, it does occasionally feel like watching someone else play a video game they keep failing at, which is a sort of weird way to watch a movie, and something that very occasionally gave me pause during the movie.*  You have to bear in mind, I don't actually play video games, so read into that whatever you like.

That said, Edge of Tomorrow is definitely worth checking out.  The movie, thankfully, doesn't take itself terribly seriously and seems to know what it is.  I see why folks embraced the movie.  I'm not sure it will launch a new genre of movies or copycats out there, but I think as it plays on cable, people will find it and it'll find the audience that missed it the first go-round.

So, yeah.  Good action, novel plot contrivance and interesting ideas sprinkled in to make it a bit better than it had to be.  And pretty fun, really.  So, good call, y'all.


*I'm currently reading Ready Player One, and when I finish it, I'll talk a bit about some of my challenges enjoying that book for some related reasons

I liked it. It was fun. That's all I got. So I think we agree. And I see the parallel to Ready Player One. I had slightly different issues with that book, but I'll wait til you post on it.

Yeah, the "why am I reading about someone playing video games?" is one of a few issues I'm having with Ready Player One. I'll get to it in a couple weeks, I figure given my current pace. But, yeah, I thought Edge of Tomorrow managed to be pretty fun, and that wasn't actually what I was expecting. I really thought they'd take themselves way too seriously.

Yeah, I didn't hate this movie. Possibly I was getting some visceral thrill out of seeing Tom Cruise die repeatedly but they did a good job of translating this to the screen. I read the translation of the book it was based on called, "All You Need is Kill" which is pretty good. The original author got the idea for the book after reading an account of a video game player on line.

I'm curious to hear what you think of Ready Player One. I enjoyed it but a lot of my other friends didn't love it as much as I did. I confess to getting it in audio book form and having Wil Wheaton being the narrator had to have helped.

I actually preferred this to Groundhog Day (which I also like). Cruise's performance here is one of his best. Seeing him transform from sniveling, arrogant coward to selfless hero was not just convincing but also quite moving (for me).

@simon - I'm actually doing the Wil Wheaton audiobook, and I'm not sure if that's helping or hurting it for me. I'll get into it soon.

@stuart - well, Groundhog Day is so ingrained in my psyche, I don't think I could quite ever make that claim. But, yeah, they did use the looping effect really well to grow the character.