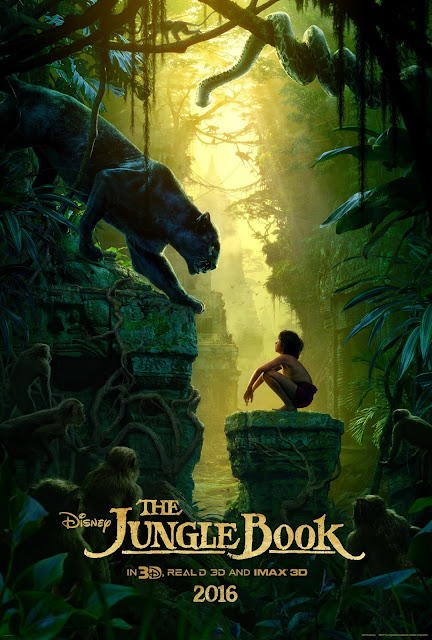 As kids, most of us caught Disney's post-Walt release of The Jungle Book, based upon the works of famed British writer Rudyard Kipling.  When it comes to Kipling, I have no real opinions.  After all, I've never Kippled.

But thanks to a love for Disney animation and Jamie's deep fondness for the movie, I've seen the 1967 cartoon a number of times.  It's not my favorite Disney animation, and my appreciation for the movie swings between adoration and annoyance, depending upon the sequence.  Balloo = Yes.  Kaa = irritation.

It does have one of the strongest sing-along soundtracks of any of the movies, and is up there with the best when it comes to "Bear Necessities" and "I Want To be Like You", even if the latter is in a portion of the movie I found just kind of confusing as a kid.

But it's also got an underrated villain in Shere Khan.

I've also seen the 1990's Jason Scott Lee version of the movie (but don't remember it in the slightest), and a good portion of a 1942 release, which is much better than you'd guess.

I wanted to be skeptical of this version, but Jon Favreau's name was attached as director.  As goofy and normal as Favreau comes off in his roles and in interviews, he's a smart guy and already turned into as solid a director as you were going to find way back when he put out Elf, and then two Iron Man movies in a row that I quite liked (yes, I like Iron Man 2.  Shut up.).

But, man, that's some tough source material, and these days, when it comes to family entertainment, the forces at work seem to be a mix of risk-averse accountants, shrieking parents groups terrified their kids might find out how things work outside their carefully helicoptered environs and a fear of being seen as anything less than a perfect exemplar of safety first.  The idea of a story taking place in a world ruled by tooth and claw seems like it would catapult this kind of story into the same PG-13 arena as the Marvel superheroes.

The first trailer made me more skeptical than excited, but a very recent trailer that came out maybe a week or two before the film's release turned me around a bit, and, of course, I was cheered by a very positive Rotten Tomatoes score (floating around the mid-90's last I checked).

I'll be honest, I loved this movie.


Again, I've never read any Kipling beyond a poem or three, so I won't compare it to the source material.  But the movie does a remarkable job of tapping into the primordial nature of the story, making the players and incidents of the story an analog for larger forces, and part of a continuum of man and nature at odds, with poor Mowgli the innocent caught in the middle.  The dwellers of the jungle have their own mythology and laws, and, as always, the powerful use those laws to their advantage.

The story here is the same one you know.  Mowgli the Man-Cub was rescued as a small child by Bagheera the Panther (Ben Kingsley) and brought to the wolves to be raised in the safest environment in the jungle.  Shere Khan (Idris Elba), the deadliest tiger in the jungle, hates man in particular, and wishes Mowgli dead, all the better if its by his claws.  Bagheera moves to take Mowgli from the jungle, and Mowgli meets new characters and threats along the way, from Kaa (ScarJo) to King Louie (Christopher Walken), to - of course, Baloo the Bear (Bill Murray).  There are even riffs on the songs from the 1967 cartoon, despite the fact I'm hard pressed to call the movie a musical.

The Shere Khan of the cartoon is aristocratic menace, a sort of Bond villain in stripes.  Idris Elba plays him as a warlord, and between his vocal performance, some spot on animation and phenomenal direction and scripting - man, Shere Khan is terrifying in this movie in a way that is going to leave kids with a whole new Darth Vader.  That whole "top of the food chain" bit plays out here in terrifying ways.  Like I said, law of tooth and claw.

Favreau's jungle is beautiful but deadly, the animals inhabiting the world personality archetypes, from the wolf-mother, Raksha (played with iron by the not-seen-enough Lupita Nyong'o), to Baloo the con-artist and King Louie, the delusional monarch.

And, of course, we have our Mowgli, the shockingly non-annoying Neel Sethi.  Oh, the casting calls they must have gone through to find a kid who could play a naturally curious, naturally precocious/ ingenious Mowgli without coming off as a Hollywood actor kid delivering his line in sing-song.  He genuinely just feels like a smart kid a bit confused by the actions of these crazy adults around him, and his needs seem so simple.

So, what's so good about it?  I don't know.  Yes, the CGI is more than passable, and all the creatures are shockingly well rendered.  The strength of our kid actor certainly doesn't hurt anything.  But, I dunno, maybe it's Favreau's commitment to the story, of not making it cutesy (really, really not cutesy in the King Louie sequence).  It's a rare coming of age story in a world that doesn't care if you're a kid, it's not going to deal with the kid this way - and the kid rises to the challenge quite brilliantly, once he's clued in to the gravity of his situation (a couple of times).

There's a place for saccharine kids faire, but stories are also there to inspire and instruct us.  They're simulations to prepare us for the challenges that may come, and to give us a point of relation when they do arrive.   That there's a place in this world for a kid's story with gravity to it, with archetypes at work, a fairy tale of the near modern era at play, it elevates the story to a mythological level that conveys messages into the mind in a way that's not going to just evaporate when the credits roll.  From the primeval setting to the terrifying characters to Mowgli's arc of young naivete to heroism, the film really manages to capture the wonder and other worldliness, but still retains the universal nature of mythology.

But, that's the kind of story that works for me.  You mileage will vary.

It's a visual spectacle, so make sure you see it in the theater.  And, if you're worried about the kiddos, my theater was full of kids under the age of 10, and they never made a peep.  They were taking in every frame with wide eyes.  Yeah, probably a bit scary in places, but, hey, kids gotta toughen up somehow.
Posted by The League at 4/23/2016 05:29:00 PM