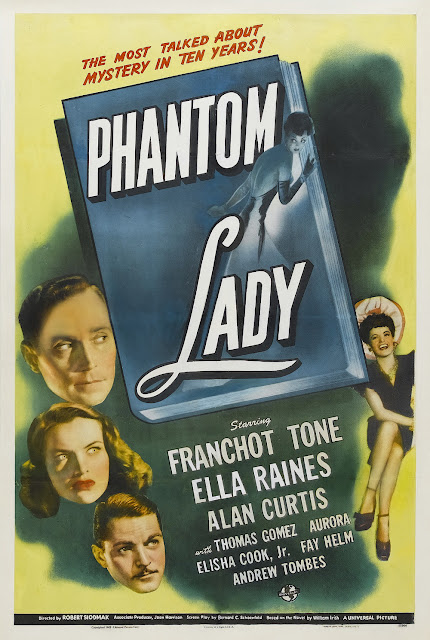 Movies produced during the height of WWII are always interesting.  You certainly get to see who signed up to serve and who stayed stateside.  That's no judgment, everyone had reasons they did what they did.  Just a couple of weeks back, for the first time I saw the government docs telling my own grandfather he was not going to be signing up as his civilian job was considered vital to the war effort.

So, we get Franchot Tone, not really the biggest star to come out of Hollywood, and hardly a household name in 2016 (he was married to Joan Crawford for several years, so may God have mercy upon his soul).  I don't think I know Alan Curtis except for looking familiar enough he must have been in something I saw (ah.  High Sierra.).  And Ella Raines is both very good in the movie and terribly attractive, so its a bit odd this movie in particular didn't launch her further along.

Noir fans will, of course, delight to see Elisha Cook, Jr. show up in a movie doing anything, and hear he plays a lecherous jazz drummer.

The odd thing is: this movie, released in 1944, never really suggests there is a war on.  Other movies from the period seem to know the world into which they're being released, but this one feels like a throwback to before the war, a sort of detective story worthy of the pulps, but even an off-screen death is attributed to illness rather than losing a young man on the front lines.

The plot:  a young socialite (Alan Curtis) is in a marriage in a downward spiral.  At a bar he meets a young woman also drinking by herself, and they decide to have a platonic night out, hitting a show, having some drinks, etc...  They never exchange names, trying to keep it mysterious, and he drops her off, never learning who she was.  The young woman was wearing a distinctive hat (this is important) and its similar to a har worn by the star of the show they go to see, a star who is quite peeved to see someone else wearing her hat (look...  I'm just reporting what happens).

Upon returning home, Alan Curtis is greeted by a group of police officers who alert him that his wife is murdered and he's suspect #1 (and only).  No problem, says Curtis, I was seen at this Broadway show, at this bar, and by this lady in a hat.  But no one can find the lady in the hat and the bartender and band member who saw him (Elisha Cook Jr.) claim to have never seen the guy.  It's almost as if the lady in the hat is a...  Phantom Lady...

With Curtis in jail, his secretary, played by Ella Raines, begins doing some detective work of her own,  Sure enough, no one is talking, and the Phantom Lady remains elusive.  She's joined by Franchot Tone, fresh back from a tour of South America and Curtis' best pal wanting to help.

It's a better movie than I'm making it sound.  While I think a modern take might handle what happened before Curtis gets arrested a bit differently, it's terrifically shot, had great characters, some great tension, and the ending is entirely satisfying in a corny kind of way.