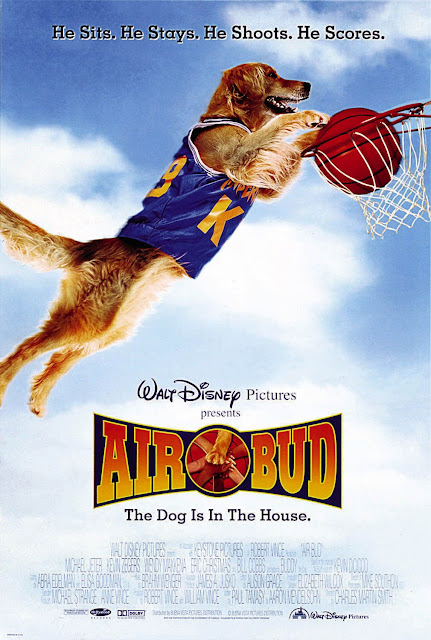 I really have no explanation for why I watched about 90% of Air Bud (1997) on Saturday night.  I was supposed to be at a baseball game for our local minor league team, The Round Rock Express, but I was taking my 86 year old uncle, and once its tarted drizzling, we just went and grabbed dinner instead.

Well, that meant I was home by 8:15, because 86 year olds like to eat dinner kinda early.

So, I walked in the door and Air Bud was on TV, and I started watching it ironically, but, you know, I kinda liked it.  It's not that hard to believe it got watered down into the movies we eventually got and spun off into the Buddies series.  But, yeah, it was okay.  And it was generally better in execution than most low-budgety stuff made for kids.

I really thought I'd seen it before, but I think I caught maybe the last five minutes.  I really hadn't seen it.

It's a movie about a sad kid living with his mom and baby sister in a new town who meets a dog that can shoot baskets.  Like, there was a real dog that could do that, and they filmed him and we had a movie about a kid overcoming some minor obstacles, the meaning of teamwork, friendship, bad coaching, sports dads being jerks, responsible pet ownership, the evil of clowns and how cool it really is when you train a Golden Retriever to shoot baskets.

It wasn't going to win any Oscars, but it wasn't totally stupid.