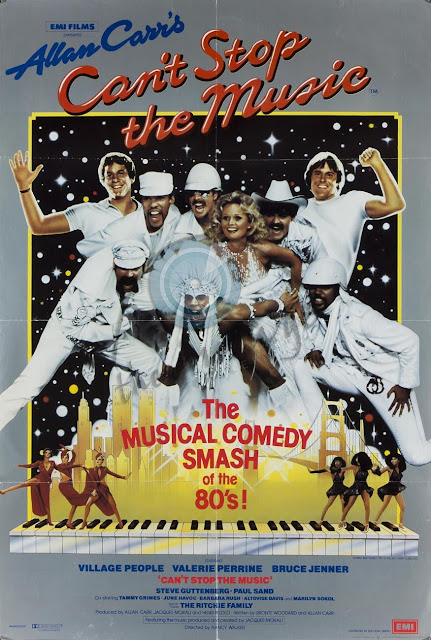 "I can't believe you haven't seen this movie," my boss said to me.  "It's terrible."
And, me, never one to shirk from a challenge, saw that it was, indeed, free on Amazon Prime.
Sigh.
Hubris is always punished, my friends.

To complain about a movie that convinced a group of people to found The Razzies is a somewhat pointless endeavor.  But, yeah, you can absolutely see how this movie would have convinced someone to make sure the ineptitude of the filmmaking got its own special notice.  It's a movie so bad, you kind of feel like maybe you'd go crazy if forced to watch it two or three times in a row - a designation I reserve for a very few films of the Manos: The Hands of Fate variety.

In some ways, it feels like a 1940's Mickey Rooney/ Judy Garland film, as a songwriter (Steve f-ing Guttenberg) and former model (Valerie Perrine) put together an act and put on a show, recruiting their upstairs neighbor (who happens to always dress as a a Native American stereotype) and some guys they know from the disco (a portion of what is to become The Village People).  The old-timey tone may make sense when you find out it was directed by Rosie, the Bounty Towel pitch-lady/ Rhoda's mom/ comedienne who appeared with Mickey Rooney in films, Nancy Walker.


But, it's a strange, strange movie.  It's like whomever wrote it didn't know exactly what a scene was for, or how stories move forward.  Or how they end (one scene, unable to end, has a baton twirler enter for no reason, stand on a table and spin flaming batons, which set off the sprinklers, so everyone has to leave - which they do, cackling like maniacs for some reason).  There are just occurrences of people all together in a certain location, and stating various plot elements as if something has occurred, but about half of what they're talking about seems to have occurred in another movie or off camera.  People say things that I assume are meant to be jokes, because people on-screen laugh, but there's nothing remotely funny about any of it.  And you spend most of the movie remembering that in 1980, even The goddamn Village People couldn't be out of the closet, so, instead, they just don't broach the subject, making for near constantly awkward staging of scenes.  It took me and Jamie a full discussion to piece together the relationship of Valerie Perrine and Steve Guttenberg's characters, and we never figured out how Bruce Jenner showed up.  Yeah.  Bruce Jenner.

None of The Village People are really characters in their own right, and they only get a few numbers in the movie, anyway, the full band only assembling about 1/2 way through the movie.

I kind of think everyone, especially Steve Guttenberg and Valerie Perrine, were off their nut on uppers through this movie.  There's a kind of grinding manic feeling to their scenes, like they might start a music group that's The Village People or they might just decide to build a rocking chair out of hobo bones.  We just don't know, we just know their eyes are glassy, and they're way, way too excited and delighted.

The movie also features a lot of aging actresses playing numerous parts that all could have been combined into one part, including someone playing Steve Guttenberg's mother - and who, once she appears, never leaves and suddenly his character's arc is about being a Mama's Boy.  There are Broadway stars of the 1970's in key roles for plots that go nowhere.  And Caitlyn Jenner back when Caitlyn was Bruce in a part that I have a lot of theories about, but... yeah.

My working theory is that Rosey the Bounty Towel Lady didn't feel like the movie was working, so she hired a bunch of her pals and inserted them into the movie either to have company around or show these kids how it's done.  Maybe.

Really, the movie's strongest player is Valerie Perrine, which is kind of an interesting statement on the movie as she's not been labeled as a leading lady in many films, but she's actually the one thing that didn't make me want to poke my eyes out after a while.

The movie does feature the YMCA sequence, which is very clearly, and by far, the best part of the film.  If the movie had been about gay subculture in New York instead of Steve Guttenberg gesticulating as if he's trying to indicate his emotions to folks sitting in the 140th row, you realize you could have had an interesting movie on your hands.  It goes a long way toward visualizing the fluidity of masculinity and objectifying the masculine form with a wink and nod that's a comment on a comment.  The sequence includes both full male nudity and Perrine's breasts, but for some reason, this movie landed a PG rating upon its release, and we can only guess what was up with the MPAA and what they were and were not able to grapple with in 1980.

Aside from the one portion, it feels like absolutely nobody knows what they're doing, and sometime around the point I realized we were going to have to watch The Village People sit down for lasagna for no particular reason, I felt the spirit of hope leaving my body.  Jamie took to just watching my varying expressions of exasperation and began cackling at me.

And, yes, the thing is absolutely sponsored by Baskin-Robbins and Dr. Pepper,   Or, as Jamie said "'Can't Stop the Music'.  Brought to you by Dr. Pepper and cocaine."

Of course, by 1980 we were seeing the backlash against disco, so the hep fad which producer Allan Carr was jumping on was nigh DOA.  And we can talk about why disco got the backlash it did when it did, and why there are a lot of lenses to look at that through, but there's no denying that "deader than disco" was a phrase people were using in the 1980's, and you can thank hip, hip/ brave people for reviving the shit out of disco and making it a force even today.  Unfortunately, the half-assed film making of this feature is not going to be the thing that inspires anyone to carry on the disco legacy (and, honestly, it was this co-opted @#$% that led more or less to the form's coma status).
Posted by The League at 4/24/2016 01:22:00 AM

I think your boss might listen to "How did this get made?". They recently did an episode on this movie, http://www.earwolf.com/episode/cant-stop-the-music-live/. I listened to it last week. Boy, I can't imagine how you were able to sit through that mess.

She and her husband do listen to a lot of podcasts. I'll have to ask.

And if I can make it through "Manos: The Hands of Fate" 5 times, "The Ice Cream Bunny" even once, this was a walk in the park.

Whenever I hear that you've reviewed a movie like this, I just picture you pouring a couple of fingers of bourbon, petting the nearest dog, and sighing with resignation as you sink into your couch and reluctantly press play.

I wish there were more bourbon involved. I really, really do.