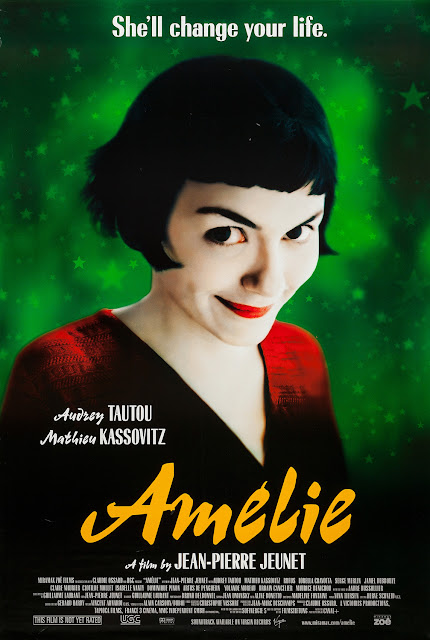 Watched:  01/13/2021
Format:  Amazon Streaming - CBS All Access
Viewing:  First
Decade:  2000's
Director:  Jean-Pierre Jeunet
I think if I'd seen this when it came out, I would have been in my 20's, the techniques used would feel fresher, the gnome thing would not yet have been co-opted by a travel company and become a well know spokesperson, and I would have also walked out of the cinema dazed and delighted, feeling like I'd seen *something*.  Alas, now I am old, and my heart turned to stone.  The whimsy of youth is not what it was, nor the CGI of yesteryear.
Amelie (2001) is very, very cute.  I bare it no ill will - it sets out to do a thing - a sort of almost magical realism thing - and incorporate CGI and other visual effects to give us picture-book insight into what the characters are going through.  And, in a very weird way, it's like a better version of some goofy 90's stuff like The Butcher's Wife where a particular person in a neighborhood makes all of the kooky characters go through a change before that character goes through a change themselves and we all learn a lesson about love/art/being silly.  You also get similar characters in, say, Batteries Not Included*, but no magical fairy girl to make it all happen.
The movie is not about falling in love.  Like most movies that pitch themselves that way, it's a movie about infatuation that kinda works out.  And that's okay - there's a place for that.  THAT it does very well.  It's two whack jobs circling each other until they finally collide.  Not my cup of tea, but it didn't fail.
It's genuinely better than most of the "neighborhood" movies in technique, ideas, visuals, etc...  but I just didn't really ever care about anyone on the screen.  Including Amelie.  And we are supposed to adore Amelie.  And, at age 26, I would have been *very* into a lovely girl with a Louise Brooks bob and who was demonstrably, cripplingly quirky.  Now...  eh.
And, per the movie, I need a little bit more than a well edited beginning where they're literally telling as much as they're showing.  At the end of the day, you're telling a story or stories, and, aside from Amelie's father, I didn't get any sense of *closure* with the other characters.  Things happen, yeah - but we have whole storylines started that don't really go anywhere.  It feels like glimpses of anecdotes you never quite get to hear completed.  We spend so much time setting them up, and then...
That said - I know people are bananas for this movie, so I'm missing something.
*which has little mechanical aliens and is just adorable
Posted by The League at 1/14/2021 11:03:00 AM