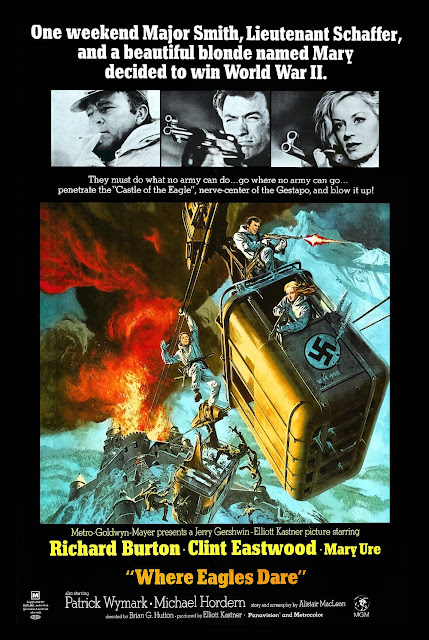 Watched:  01/13/2021
Format:  TCM on my DVR (where it had been languishing)
Viewing:  Second
Decade:  1960's
Director:  Brian G. Hutton
While these days certain people would raise their hands and complain this is cancel culture, sometimes it's a good move to just watch a movie where we blow up a bunch of Nazis.
Seemingly torn from one of those men's adventure magazines of days of yore, When Eagles Dare (1968) follows the completely insane mission of Richard Burton in a rare action role as he pairs with a "in his prime" Clint Eastwood and with a handful of other people, invade a mountain castle Nazi fortress and then blow it the hell up.
There's a hell of a lot more to the movie - it's really an espionage caper - but I don't want to spoil it if you've not seen it.  But expect lots of machineguns, an unreasonable amount of dynamite, and the unlikely prospect of Richard Burton physically outperforming a 1968 Clint Eastwood.  It had some astounding scenes on some cable cars, a bus ride you won't forget, and lots and lots of uses for a rope with a clip on one end.
In addition to Burton and Eastwood, the movie also stars Mary Ure, and has Ingrid Pitt in a smaller role.  In fact, Pitt appears on screen for several scenes in the back half of the movie, but for some reason, she has no lines and is given nothing to do.  It's honestly kind of weird.  I half think they forgot to write her character in, and then someone thought "we actually need to logically have her here, but we don't want to pay the writer for more scenes" or something.I've certainly heard of similar things happening.*
The *lack* of screentime for Ingrid Pitt in this movie is maybe my only real beef with it.  But that's a beef with all movies, but, like, two.
Anyway - this movie is all plot and action with a minimum of character.  It's a super-tight thrill ride kind of flick, and delivers on its promise.
*apparently a big driver for why you don't hear someone tell Capone about a character dying in Untouchables in one of the most famous scenes in that movie is not artistry - that's a glad happenstance.  Rather, they couldn't get David Mamet back to write that scene when they knew they needed it.
Posted by The League at 1/13/2021 10:56:00 PM