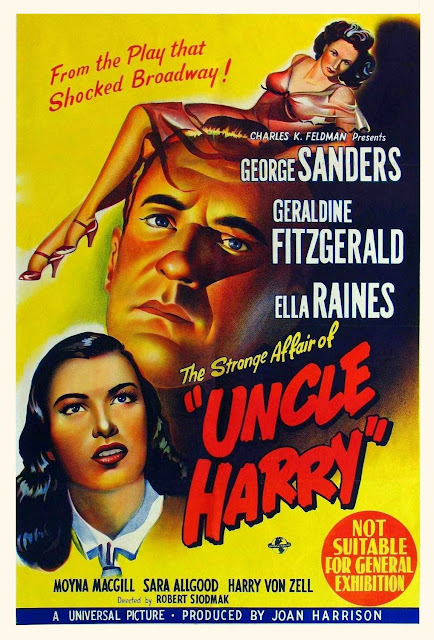 Watched:  01/15/2020
Format:  TCM on DVR (Noir Alley)
Viewing:  First
Decade:  1940's
Director:  Robert Siodmak
I'd been wanting to see this one for a while, so I'm glad it came on Noir Alley.  Directed by Robert Siodmak (one of those names that means this should be, minimum, pretty good), starring George Sanders, Ella Raines and Geraldine Fitzgerald and - a more recent interest - produced by Joan Harrison - it had a lot of elements that made it worth at least a look.
The Strange Affair of Uncle Harry (1945) centers on a man aging into permanent bachelorhood as he pays the way for and cares for his two sisters - one a widow and the other an invalid.  The family fortune disappeared in the Depression, leaving the siblings scraping by in the rambling house that is a reminder of better times.  "Uncle Harry" (Sanders) meets a co-worker in from New York (Ella Raines) and the two spark an interest.
However, one of the sisters isn't quite ready to let Harry go.  And things get weird.
The movie was made at the tail end of WWII (released pretty much the weekend after VJ Day), so it's got some similarities to other WWII-era films in that the cast is female-centric and the dashing male lead is George Sanders.  It takes place in limited spaces (based on a play, so there's that) and overall feels initimate and somewhat scaled down.
It's as easy to call this a melodrama as a noir, but I can see why Joan Harrison would have been interested in the script.  The characters are interesting and imperfect - no one (not even Raines) is a saint, and there's some genuine weirdness going on that goes beyond just sisterly affection.*  But, at the same time, Raines' character feels shockingly direct regarding her interest in Harry - she's no coy young lady, even when asked specifically to play that role.
As I thought - direction and performances were terrific, Sanders is in great form, and Geraldine Fitzgerald is note perfect.  But despite the actual warning not to spoil the ending they literally tag onto the end of the movie, I'll say:  the studio enforced ending that led to Harrison's parting with Universal and Siodmak shooting the bird at the studio is... awful.  The movie builds and builds to something absolutely mind-scrambling, and then... we get this cheesy ending.  But, you know, when they were wrapping this thing up, we were still fighting in Japan.  I get that maybe they wanted something that wasn't so depressing.
So, it makes it hard to actually recommend the movie.  It's a solid film right until, literally, the last minute, and then everything falls apart.  Did not like.
During the intro and outro, Eddie was joined by scholar Christina Lane - who has too many credentials for me to get into here - but she's an accomplished film academic.  I just picked up Lane's book on Joan Harrison and plan to crack it this weekend.  So - while I've seen a lot of Harrison's movies over the years, I'm looking forward to reading about the actual woman who made them happen (I also recently picked up Phantom Lady on BluRay and keep intending to show it to Jamie, and then I forget).
*that lady in the negligee is not the romantic subject of the film
Posted by The League at 1/16/2021 12:29:00 AM