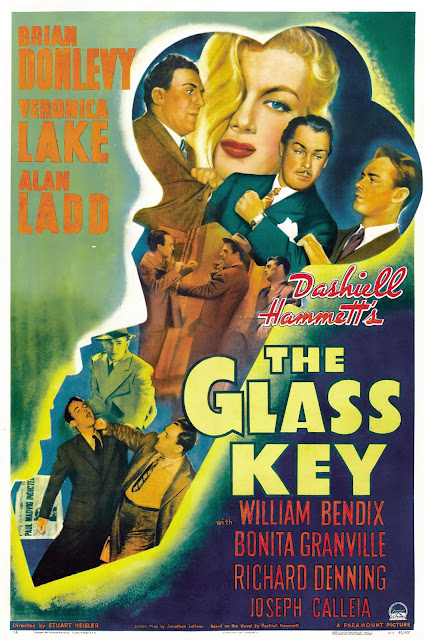 Watched:  01/16/2021
Format:  Noir Alley on DVR
Viewing:  Not sure
Decade:  1940's
Director:   Stuart Heisler
Measured by the fact I think this is the fourth time I've seen this movie, you can take it at face value - I think pretty highly of The Glass Key (1942).  But, it is based on a novel of the same name by Dashiell Hammett, co-stars Alan Ladd and Veronica Lake, and has a large supporting role for William Bendix - w, yes.  I'm pre-disposed to like the film.
We're going to cover Miller's Crossing on the podcast at some point, an early 90's Coen Bros. film, and one of my personal canon.  I think I was in early college when I read my first Hammett on JAL's recommendation and got a few pages into Red Harvest before saying "wait a minute, maybe the Coen Bros. weren't so darn clever after all...".   Because, honestly, Miller's Crossing is the love child of The Glass Key and Red Harvest, both Hammett books.*
I did read The Glass Key before seeing this film (and just learned via Eddie Muller there's an earlier version starring George Raft - which may lead to me skipping it) - and, sure, the book is better, yadda yadda.  But, the film is terrific all on its own - a twisting, double-double-crossing political/gangland yarn that adds up perfectly, but the first time through can be hard to keep track of all the parts of the equation.
Ladd plays the lieutenant to a political boss who, upon meeting the daughter (Lake) of a reform candidate  decides to back the reform candidate.  This gets his boss crosswise with another, shadier, political boss, and all of a sudden Lake's brother winds up dead on the street.
The movie has a similar tone to a Hammett novel when it comes to casual brutality and unsavory characters.  That includes our lead, who never really throws a punch, but he's not exactly a knight in shining armor as he works angles, falls out with his boss, and tries not to fall for Lake.
The movie is difficult to discuss, but the characters in it are terrifically drawn, each instantly knowable in broad strokes, even if in the framework of the story, they're all capable of anything - which is part of what keeps the mystery of the story rolling.
Frankly, this is a "could be a TL;DR post" kind of movie, and I'm not going to do that.  Maybe I'll podcast this movie one day instead.  But in the meantime, I highly recommend the film.  Just go with that.
*and a bit of visual flavoring from The Conformist
Posted by The League at 1/16/2021 11:24:00 PM