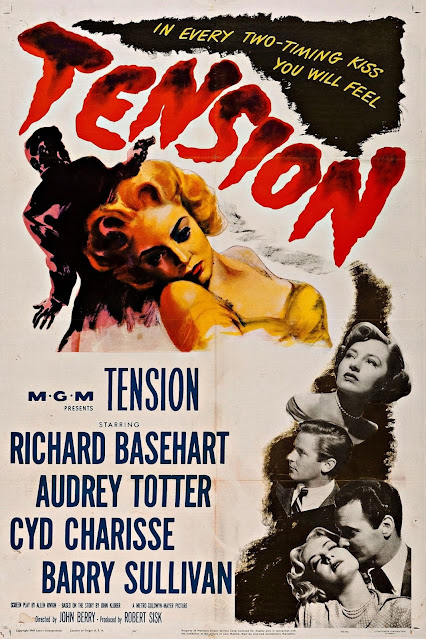 Watched:  04/07/2021
Format:  TCM on DVR
Viewing:  Unknown
Decade:  1940's
Director:  John Berry
It's relatively near my birthday, and so Jamie said "watch whatever you want", and-  me being me - I'd been wanting to watch Tension (1949) again as it had been a while.
If you've not seen Tension, which Jenifer introduced me to years ago, thereby doing me the lifelong solid of introducing me to Audrey Totter's work, you should!  It's noir, but kinda goofy, has a career high performance for Totter as the femme fatale, Richard Basehart playing Richard Basehart, and Barry Sullivan and William Conrad as two cops I would have followed in any number of movies as they strode into rooms like they owned the place everywhere they went.
Weirdly, the film stars Cyd Charisse in a non-dancing role, something MGM must have been trying on for her to see how far she could push her acting chops.  And she's pretty good!  But mostly her job is to look lovely and be concerned about Richard Basehart, so she wasn't about to give Bette Davis a run for her money at this point.
I won't describe the movie as "camp", but it's certainly a goofier entry in the annals of noir.  From the hook of the plot to the strategy of the cops trying to sort it all out, and topped by Totter's Claire Quimby - a whirlwind of badgirl behavior - it's a dang entertaining film.  You won't compare it to, say, The Third Man, but it does reward rewatching once you're familiar with the characters.
Claire Quimby married Warren as a way out of whatever her life was in San Diego and because he was cute in a uniform.  He seemed like he was going places - but now she's living in a dingy apartment as Warren works 12 hours night shifts 5 days a week as a pharmacist, scrimping and saving to get her to the middle class life he thinks they both want.
At night, she's actually cruising the lunch counter in the pharmacy, looking to get picked up by guys who can show her a good time or provide her with her next step up (and with the looks to make it happen).  She runs off with a guy with a flashy car and a beach house, and Warren's attempts to get her back flop - he's beaten up and humiliated.
SPOILERS
Thus, Warren dares to wear 1940's hard contact lenses to change his appearance, and creates a secondary life for himself as "Paul Southern", creating a persona unrelated to Warren so that the cops will look for this Southern person instead fo Warren when the time comes to kill Barney and reclaim his wife.
But - he meets Cyd Charisse, who apparently doesn't meet many men, because despite being Cyd Charisse, she's available and latches on to the mysterious cosmetics salesman who moved in next door.  Warren kinda realizes this murder scheme is dumb, his wife isn't worth it, and... hey... new girlfriend.
Planning to let Cyd Charisse in on his charade and double life, he returns home, and so does Claire - letting him know Barney is dead.
Enter our cops, trying to figure out what is going on with this weird couple - and so Barry Sullivan applies... TENSION.
IE: he sweats Warren and seduces Totter.
Going for the Clark Kent Approved method of a "no glasses, different guy" disguise, was a pretty bold move in an era where Superman was already a pretty well-known figure.  But watching Sullivan deciding to go for Claire/ Totter, you really get the feeling he's okay with however this pans out and would take equal pleasure in jailing Warren and going to Acapulco with Claire or putting Claire away.  No big whoop.
END SPOILERS
It's a well shot, tight little film that does a lot with what it is.  And, really, it's a showcase for many of the things Totter does best when she gets to play a bad girl.  But add in a windy, multi-part plot and all the parties playing against each other, and while not exactly a mystery as to who did the murdering, it is a potboiler seeing how this thing will play out.
Anyway - can't recommend enough, if for no other eason than to see Totter's character's constant irritation with Basehart's character.  She is done, y'all.
Posted by The League at 4/08/2021 11:41:00 PM