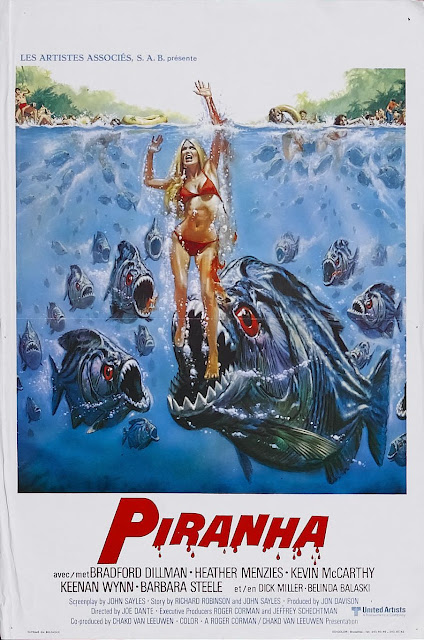 Watched:  04/02/2021
Format:  Amazon Watch Party
Viewing:  First
Decade:  1970's
Director:  Joe Dante
You can't discuss Piranha (1978) without pointing out that it's the first film by director Joe Dante- and is already very Joe Dante.  And that it's also written by indie film director and writer John Sayles.
Here in Central Texas, we also always mention "you know, they filmed this partially around San Marcos".  But I didn't know the final bit occurred at now-defunct water park Aquarena Springs, which was a feature of summer-time-life for the strip between Austin and San Antonio along I-35 for decades, and then - somewhat inexplicably, went belly up while I was in college as parents decided it was no longer hip, I guess.
But, yeah, the movie is about a skip tracer looking for some kids who went missing (the young lady who played Louisa in Sound of Music), and who winds up pairing up with an alcoholic to learn a mad scientist has been breeding particularly nasty fish in a tank near his house.  And, whoops, he and Louisa accidentally release them into the local river that people live on, contains summer camps, etc...
And, of course, this being a horror movie, things go poorly.
The movie includes Kevin McCarthy, Keenan Wynn, Dick Miller, Paul Bartel, and for some reason, Barbara Steele.
Anyway, it's a lot of fun, the fish make buzz-saw/ bee sounds, and you see some pre-80's Texas.
Here's a link to a trailer for a doc on Aquarena Springs, and they kinda talk about Ralph the Swimming Pig, which was something I desperately wanted to see in 4th grade, but didn't see til 7th.  You know what?  It lived up to the hype.
Posted by The League at 4/04/2021 12:06:00 AM