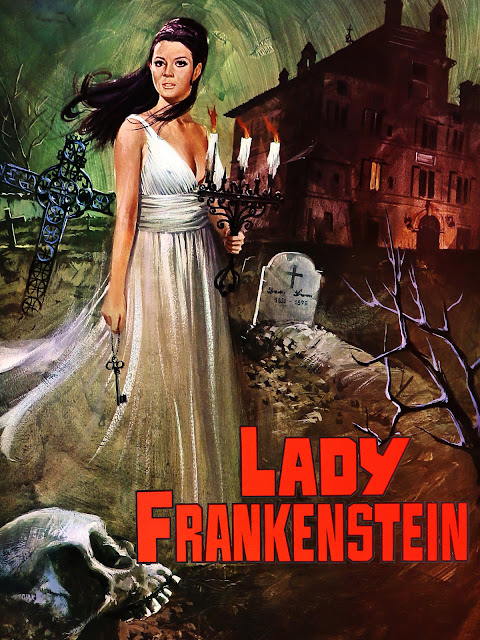 Watched:  04/06/2021
Format:  Amazon Watch Party
Viewing:  First
Decade:  1970's
Directors:   Mel Welles, Aureliano Luppi
For Jenifer's take, click here!
Weirdly, this European produced take on Frankenstein co-stars film great Joseph Cotten.  I have no explanation other than Cotten wanted to have a stay in Europe for a while and this work was easy and probably wouldn't be seen by Americans, especially fifty years later on personal computers.  But here we are!
The basic set-up for the story is that the good doctor (Cotten) is getting set for his grand experiment to bring a human to life when his daughter (Rosalba Neri) returns from med school, a fully licensed surgeon with amazing hair.  He has a sort of side-kick who helps him out in the lab, as well as the usual grave-robber types hanging about.
But when the monster springs to life, he is super into murder, and starts with Baron Frankenstein.  Well, funny story, because his daughter Tania is way more of a freak than he.  So, as the monster runs around murdering pretty much exclusively copulating couples (viva Italia), the NEW good doctor gets to work on a plan for creating her own monster who will kill the first monster.  WHAT COULD GO WRONG?
She first seduces and marries her father's invalid sidekick, then convinces him to undergo a brain transplant into the local handsome moron.
You guys, I'm not gonna lie.  This movie has a ton of nudity and sex, and then you remember "oh yeah, this is an Italian horror movie.  They think Americans movies are way too tame."  And so.  But it also creates a certain very dark take on the proceedings as Lady Frankenstein herself manipulates the men around her and seems to thrill in the more sadistic elements of what's going on - leading to an ending that had our watch party basically saying "well, huh" as the film wrapped.
It IS a horror movie.  Horrible things happen!  Some of it was some weirdly dark content I did not expect from what seemed initially like a goofy Hammer knock-off.  Because, man, there are some sharp turns there in the second half.
I'll at least say: it was never boring!  But it is absolutely not for everybody.  Did I like it?  I mean, I was entertained.  I'm not sure it was a good movie, but it at least surprised me and wasn't entirely camp.  So.  I dunno.
Posted by The League at 4/07/2021 11:35:00 PM