In college I took a class called "acting for non-acting majors".  Everyone in the room had to state who their favorite male and female actors were.  The folks who weren't film buffs tended to drop the names of popular actors of the day, many of which left me rolling my eyes so hard I'm surprised my orbs weren't creaking with rust by the time they got to me.  The folks who wanted to be seen as having discriminating taste all said "Al Pacino", and this was well after Scent of a Woman.  It was amazing.

Well, in the Spring of 1997, when asked, my answer was:  Jimmy Stewart 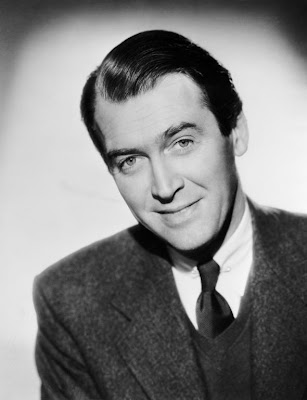 And if you asked me again today, I'm not sure my answer would change, other than to say that I see no point in asking the question.  Today, I would also say:  Jimmy Stewart

And today is Stewart's 104th Birthday.


For people who do not watch movies from periods before Dolby Sound or who cringe at the idea of old movies, I suppose that they're probably stuck with a vision of Stewart as George Bailey from It's a Wonderful Life.  And that's probably legacy enough.  But the truth is that Stewart's career spanned decades, and he appeared in many terrific films.


and one of my favorites: Anatomy of a Murder


All of that, of course, is just a fraction of what he appeared in, but I like to think it helps to demonstrate his diversity, and what Jimmy Stewart could bring to a movie, whether he was appearing in a western, a family comedy or a Hitchcock thriller.


Born in Indiana, Pennsylvania Stewart attended Princeton and did a short stint on the stage before finding himself in Hollywood.  He served with distinction in World War II, but didn't use his service as a selling point for his movies.

Such a nerd was I that one of the first online purchases I ever made was through the Jimmy Stewart Museum in Indiana, Pennsylvania, where I found they had 8"x10" images from his movies for sale.  (I have a copy somewhere of the Harvey picture above).

I suppose I've always appreciated the "everyman" quality that Stewart brought to his roles, and how better directors figured out how to best use that disarming quality.  Under stress, you get the Stewart of Rear Window.  Or the passionate citizen of Mr. Smith Goes to Washington, a movie that will make you want to run around your living room draped in the Stars & Stripes.   But you can also get Elwood P. Dowd of Harvey, the good natured drunk who may just have a 6' rabbit for a best friend.

The man had range, and he brought character and soul to each role, the sort of thing my acting class comrades were trying to identify, but stopped short with famous names.  That Mr. Stewart might be regarded by the mass population as the guy from a single Christmas movie is okay, but it misses the bigger picture and the spirit he brought in film after film.  I suppose he gets his dues, but you'd like to see some nods along with other greats.

As a fellow Pennsylvania man, I thought I should give you the heads up that he was born in Indiana, PA, not Philadelphia, Indiana. You also didn't mention that the man was a cheerleader!

Post corrected! Indeed he was a cheerleader. I had forgotten that detail.

Great post. That story about your college class was hilarious. Jimmy Stewart, as beloved as he is, doesn't get the credit he deserves as an actor. I think many people have this caricature of him in their mind of a kindly simpleton. But as you say, he had enormous range.

I'm not very original. My favorites are still It's A Wonderful Life and Mr. Smith Goes To Washington, but he was great in his Hitchcock movies. As you said, Hitchcock knew how to use is everyman quality to bring people into the story, where he could mess with them. Have you seen Rope? It's one of my favorites.

Have you noticed how much he seems to have aged after the war? The difference between Philadelphia Story (1940, age 32) and It's A Wonderful Life (1946, age 38) is stunning. But I think his acting improved significantly as well.

I haven't seen Anatomy of A Murder. I'll have to check it out.

That clip is GOLD. I haven't seen Rope, but its showing this summer at the Paramount in Austin, where I plan to catch it during Hitchcock week.

Yeah, I like the different periods of Stewart, from young man the studio didn't know exactly what to do with, to the guy next door after WWII to the somewhat crotchety Stewart of Winchester '73 and his middle-aged years. I agree... WWII definitely seemed to take something from him in years that it gave back in talent and character.

"WWII definitely seemed to take something from him in years that it gave back in talent and character."

Yeah, vertigo is amazing, and rope is a great example of how to translate a 1-room play onto screen.

Of course, the fact that rope is about a professor whose students turn his teachings into murderous plots puts it right up my alley.