Ray Bradbury Merges with The Infinite

Like many of us English-speaking Westerners, one of the great moments of my youth was having a Ray Bradbury book put in my hand.  Oddly, it was Fahrenheit 451 and I was in fifth grade.  Most certainly I had an ambitious teacher, one who did not mind much if she shattered our cozy suburban world with a picture of dissolute marriage in an ossifying culture that was just our culture carrying on from our current trajectory.

It'd difficult to say how much of an impact the book had on me, and continues to have on me, as I've returned to it a half-dozen times, seen the movie a handful of times, and even consumed it in comic form (one of the few forms of print Bradbury would suggest would survive the end of books.  The end of ideas.*). 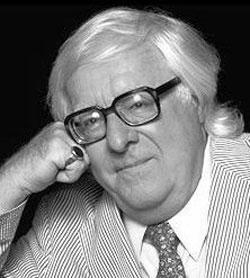 Just a year before Fahrenheit 451, my parents, knowing I had a thing for that red dot in the sky, took me to see a play of The Martian Chronicles, and the honesty of what it had to say about us shook my ten year old little self.

Throw in Something Wicked This Way Comes and re-reading the Martian Chronicles two or three times and you've got the literature that left an indelible impression on a worldview.  It's completely fair to say that these books had a huge hand in shaping my perceptions, and absolutely they posed the questions that helped to lay the rail for the long haul of developing a moral perspective.  And that's the value of fiction, I think, when you're coming of age.

And, really, how many millions of us are there who understood where Mr. Bradbury was going with all this?  How many of us clenched paperbacks on the school bus or leaning up against the wall while we sat on our twin -sized beds and learned something about us that sounded perhaps deadly accurate even when wrapped up in spacesuits or demon carnivals or watching old women die in a pyre of novels?

The short stories, too.  I can't remember the names, but the one where a gentleman is arrested for going for a walk at night?  Something I think about every time I put the leashes on the dogs after sundown and consider the empty porches in my neighborhood, added for a touch of decoration but mostly not for function.

I'm a fan of Bradbury's prose, and if you read much sci-fi growing up, you knew a Bradbury book from an Asimov book within a paragraph.  Asimov illustrated and explained like the exacting scientist he was, while Bradbury worried about the characters at the center of the concept, sought resonance not through amazing technologies or tapestries of artificial history, but through the experience of the character and how that felt to the reader now.  And while you will never see me knock Isaac Asimov or the robot stories, too much science-fiction becomes enamored with their concepts and forgets the human experience.

And, wow, the odd places Bradbury might turn up.  On the commentary of a DVD of Frankenstein, a movie that, apparently, we both loved, though he'd seen it during its original theatrical run (just imagine).  TV specials.  You never knew.  The man did not shy from the public.

The short stories printed in the brightly colored pulps, the short stories collected into books, the rise to household name and medals from the White House...  Bradbury lived a fascinating arc of the American creator, one who rolled up his sleeves and put quarters into pay typewriters to get the work done, coveting rejection, developing his craft until the editors opened the gates and the world he envisioned, one utterly familiar, but not in that cheap way with a twist, but one that told us something about ourselves and where we were headed.

Mr. Ray Bradbury died yesterday in Los Angeles.  He was 91.

Oddly, on Sunday I was reading an article about how Bradbury would paper his walls with his rejection letters.  Bradbury was not young when I was a kid.  I couldn't help but wonder "how much more time could he have?"

* And there's something to say about whether or not superhero comics have survived in a zombie, shuffling state, the end of their ideas.  But let us not editorialize here today.
Posted by The League at 6/06/2012 12:33:00 PM

I loved me some Ray Bradbury. I think Fahrenheit 451 is a great book and the Martian Chronicles is a wonderful collected serialized story but my favourite book by him is Something Wicked This Way Comes. I just recently finished reading The Night Circus which evoked some of the same things I experienced while reading Something Wicked although The Night Circus is not as dark.

I had been exposed to some of his stories when I was in Elementary school, but I never read Bradbury's works until recently. I've started reading all those "you were supposed to have read these as a kid" stories about two years ago.

What really struck me about his death is that I'm currently in the middle of reading an anthology of 100 of his short stories. They now have that much more of an impact on me.