Really, Ed Wood (1994) could not have come out at a better time for me, personally.  I was 19ish and headed into the production track for Film at Univ. of Texas.  The movie landed with a thud in theaters (less than $6 million at the box office on an $18 million budget), but I think found its audience on home video.  Maybe not a huge audience, but I'm not really sure what anyone expected from a biopic about an unknown figure of questionable contribution to humanity, shot in black and white, that involved staunch support of cross-dressing, and, arguably, it's biggest star circa 1994 was Bill Murray who was in a smaller part. 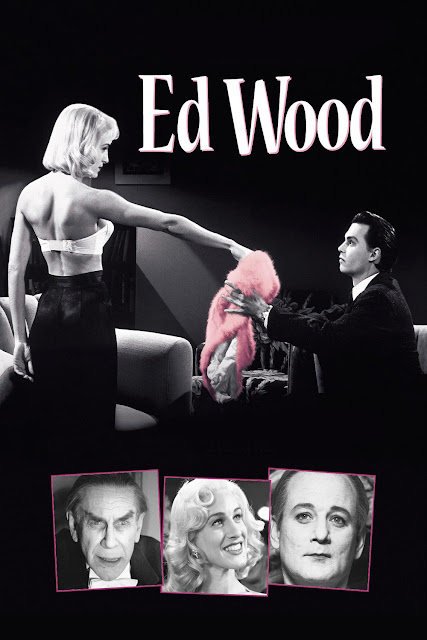 The movie meant a lot to me at the time as a wanna-be filmmaker - especially as I realized I would always be one of questionable talent and choice-making, and even today I rank it pretty highly not just among my favorite Tim Burton movies, but among movies in general.  And, as we went through film school, it basically gave us a script to quote from, not the least being "Let's shoot this @#$%er!"

If you haven't seen it, and don't know what I'm talking about, Ed Wood tells the story of Writer/ Actor/ Director/ Producer of B-pictures, Edward D. Wood, Jr., who was considered, for many years, the worst director to ever make movies.  And if you've seen his most popular offerings, Bride of the Monster and Plan 9 From Outer Space, they make a pretty strong case for that supposition.*

Ed (Johnny Depp) is a man of big Hollywood dreams, who wants to create the same movies that inspired him, like Dracula and Citizen Kane, but his stabs at creative work via live theater aren't really panning out, and he can't get funding until he hears about a small studio thinking of making a biopic of Christine Jorgensen, one of the first Americans to undergo gender re-assignment surgery.  Ed lands the job by revealing he understands Christine as he, himself, likes to dress in women's clothing.  Of course, Ed's actually a cross-dresser, not transgendered in the same way, and so he delivers a completely different movie with Glen or Glenda?, which is basically his own story.

Meanwhile, a chance encounter with his favorite star, Bela Lugosi (Martin Landau in an Oscar-winning role) leads to a friendship and star for Ed's movies - and, of course, having a name to associate with his own doesn't hurt when it comes to getting the money.  Lugosi hasn't worked in years, his wife has left him, he's going broke and, the rumors about Lugosi's drug habit may be more than just a rumor.

In revealing himself, Ed gets some momentum and begins to surround himself with a gang of misfits and weirdos, all excited to play along.  And, really, there's some amazing casting in there.

Lisa Marie plays real-life Elvira predecessor, Vampira (aka: Maila Nurmi), Jeffrey Jones - always terrific no matter what he shows up in - plays psychic Criswell, Bill Murray is actor and showman Bunny Breckenridge, and George "The Animal" Steele is amazingly dead-on as Tor Johnson.  Add in Patricia Arquette, Sarah Jessica Parker, Juliet Landau and Vincent D'Onofrio as Orson Welles (and more!) and it's a hell of a cast.

Despite the dubious quality of the projects, a bit like The Muppet Movie, Ed's vision gives everyone a rallying point, culminating in all of the characters getting baptized in a backyard pool in order to secure funding from the Baptist church.  But in that world, everyone is comfortable with one another, it's a place where Ed can put on an angora sweater and wig if he needs to feel comfortable directing and no one blinks.  There's really something about pulling together to put on a show that draws all kinds and gets them to work together, in movies and in reality.

The movie also tracks the last days of Lugosi, no doubt embellishing and exaggerating. not something I always love, but Landau is terrific.  It's a bit of an oddball movie and a bit inconsistent in tone as it swings into the pathos of Lugosi's issues, but that change never bothers me.  As daffy as one scene might be, the character arc for Bela as he reaches rock bottom with his addiction with Ed at his side to help him back is a rare depiction of real friendship on the big screen.  And, truly, Landau is remarkable as Bela, and no doubt told a Hollywood story that's too rarely acknowledged.

As good as Depp is as Ed, I do want to point out how great Jeffrey Jones and Bill Murray are in their respective roles.  Murray is typically great, but for folks who only think of Jones as Principal Ed Rooney, he's absolutely hysterical in this movie as a happily fraudulent showman who knows how to work a crowd, and carry-off a little B&E.

If I took inspiration from the film as a young film student, it was in how someone pursues their vision no matter how many doubts and questions crop up, and always taking a big-tent approach to wanting to know and work with folks and appreciate what they bring to the table.  Also, trying to appreciate mishaps and chaos a bit and try to see it all as part of the process, and, knowing what it means to stick by a friend as things get a little dark.

Burton's direction and art direction is fantastic.  Shot as a black and white horror film, the movie really does feel like part of the world it tries to capture, and when Burton recreates the scenes from Wood's movies, it's absolutely pitch perfect as you can see how concept fails in execution.  And let's not forget Howard Shore's outstanding music that both matches the source material and elevates it.

It's not really a Halloween movie, but I like to watch it in October in the midst of all the other monster movies, a small peak behind the scenes, of people willing to suspend disbelief not just for what they see on the screen, but in taking on the world.  And that's okay.

Let's close it out with both Landau and Lugosi in the same scene. And, indeed, a battle call for all of us atomic supermen.


*I still argue that Monster A-Go-Go is the worst movie I've ever seen, but I don't think anyone is pointing towards any particular auteurship behind that movie
Posted by The League at 10/10/2015 12:56:00 PM

Well, I need to see this now. I sort of recall seeing this title, but I don't really remember this film at all. And I know I haven't watched it. Thanks for such an intriguing discussion.

It's worth a view. You could tell Disney/ Touchstone had no idea what to do with it when it showed up at marketing, and it's a hard sell as a drama or 100% comedy. And while people point at the 90's as the PC-era, the cross-dressing issue certainly added a layer of complication they clearly weren't ready for. Unfortunately, I think in the ensuing 20 years, the market for Plan 9 From Outerspace, etc... has really dried up. I suspect the ready availability of watching whatever you want when you want has eliminated a lot of the "the TV station is running this movie because no one owns it anymore, and its free, and they needed to kill 2 hours" that created that habit.