SLAM EVIL with us During a Live Tweet of "The Phantom"! (Friday, April 8th at 9:00 Central) 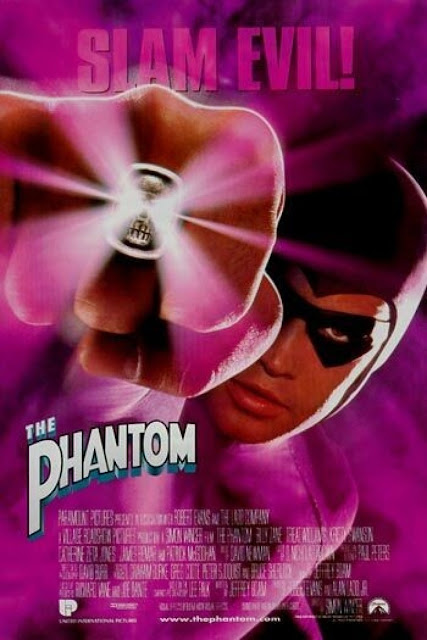 Honestly, it doesn't seem like I've watched this from beginning to end since that summer when I dragged my brother to the theater to catch this flick.  The staff kind of shook their heads mournfully at us as we first, purchased tickets, and then, even more sadly as we headed willingly into the theater.

Basically, what I remember from this movie is that Billy Zane is fun (and still has hair), there's both a dog and a horse in the African jungle, Treat Williams chewing scenery and Kristy Swanson works a pair of jodhpurs and riding boots.

We're recruiting YOU into joining us next Friday, April 8th at 9:00 PM Central for a Live Tweet of the movie.  Hopefully that's not too late for East Coast, not too early for West Coast and, apparently, this is the time that is best for Stuart.*

If you've not seen The Phantom and/ or don't know anything about The Phantom - all the better.  He's a purple superhero.  That's what you need to know.

The Phantom? I think that Netflix, guiding their policies off of historical viewing numbers, has only allotted enough bandwidth nationwide for 3 people to watch this movie at a time.

I'm not actually that concerned we'll crest that number.